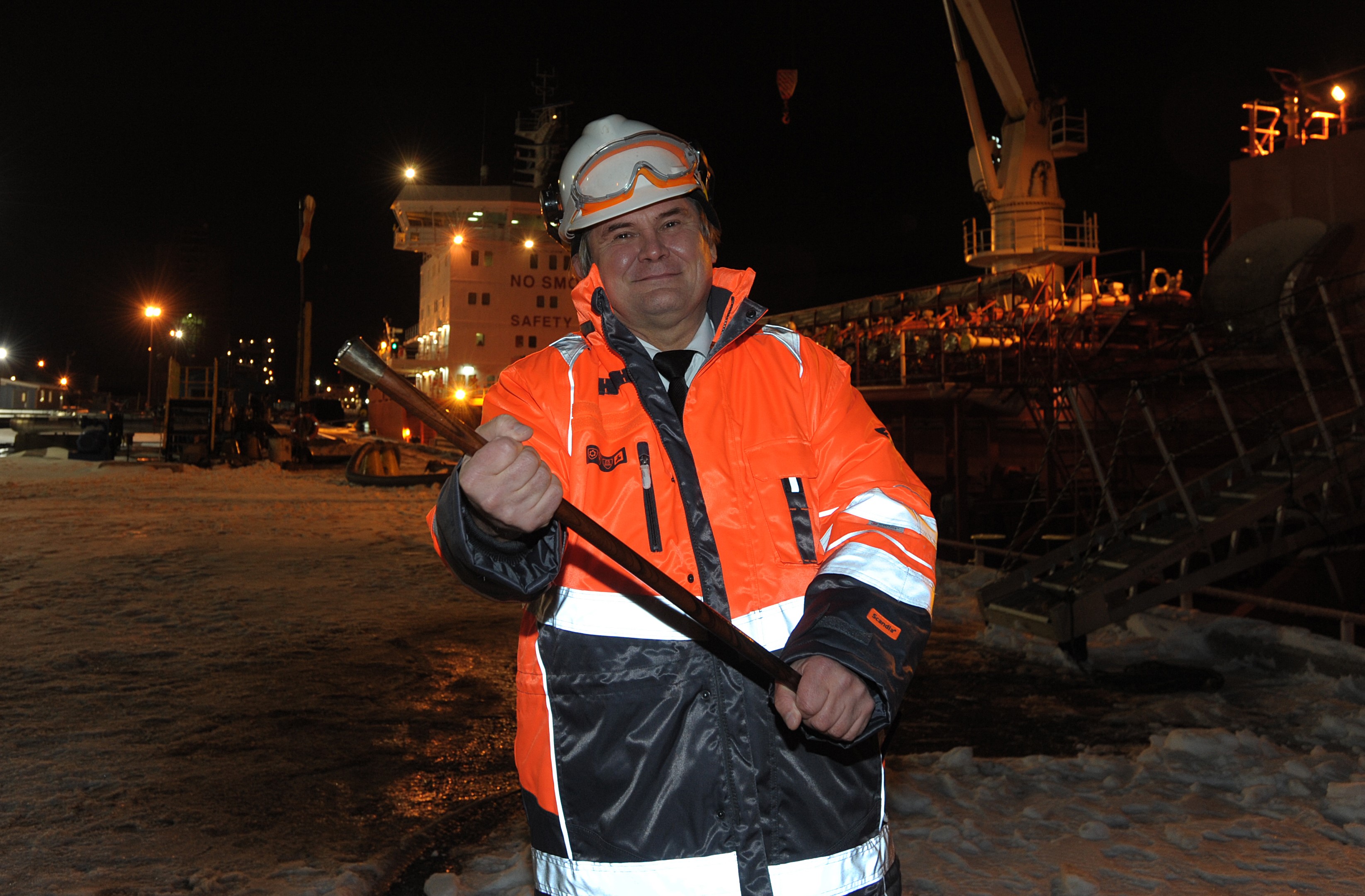 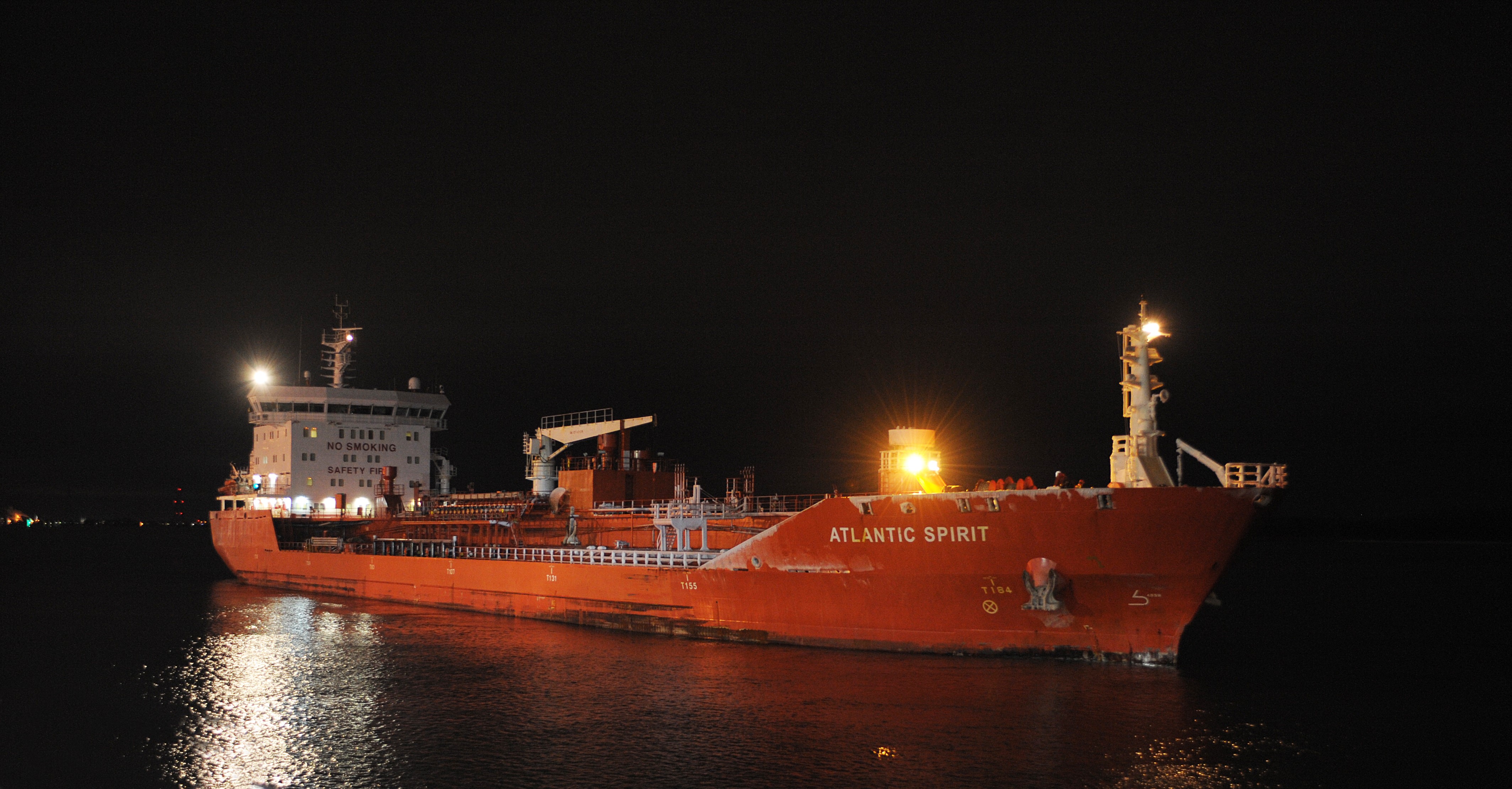 Montreal, January 1, 2021 — This afternoon at 2:59 p.m., the Atlantic Spirit was the first ocean-going vessel of 2021 to cross the Port of Montreal’s downstream limit at Sorel without a stopover. True to a tradition dating back over 180 years, the Montreal Port Authority (MPA) is awarding the Gold-Headed Cane to its master, Captain Oleksandr Popov.

The Atlantic Spirit left the Port of Flushing in the Netherlands on December 18, 2020. Flying the flag of the Marshall Islands, this ABC Maritime shipping line tanker, owned by McKeil Marine Limited and chartered by Frontier Lubricants & Specialities, was carrying a cargo of refinery distillates (hydrocrack bottom) used as a feedstock for lubricants, headed for Vopak Terminals at Section 94 of the Port of Montreal.

Ukranian-born Captain Popov has served more than 15 years as master and four years with the ABC Maritime line.

The crossing, which was made in somewhat rough weather with strong winds and at times intense waves, took 14 days. The MPA also recognize the work of the pilots of the Corporation of Mid St. Lawrence Pilots, Eric Villeneuve et Guillaume Pouliot, who safely guided the ship to port.

Due to the health restrictions in force during the COVID-19 pandemic, the Gold-Headed Cane engraved with the name of the winning captain and the ship’s name was awarded to him on the dock by Port of Montreal Harbour Master. The traditional Gold-Headed Cane awarding ceremony where the Montreal marine industry usually gathers will not take place due to the pandemic.

At the start of this new year, the MPA is releasing preliminary results for 2020.

At the end of an extraordinary year, marked not only by the COVID-19 pandemic, but also by the rail blockade and strikes by checkers and longshore workers, the MPA posted a 14.1% decrease in traffic, with a total of 34.9 tonnes of goods handled.

Containerized cargo traffic was less affected than anticipated, dipping 5.7% compared to 2019 for a total of 14.2 million tonnes handled, or over 1.6 million TEUs (twenty-foot equivalent units).

Liquid bulk was the sector most affected by the pandemic-related economic crisis, falling 24% from 2019, while bulk goods dropped 10%, except for grain due to bumper crops in Western Canada and increased global consumption of agricultural products.

Despite these declines in all sectors, the last quarter of 2020 was marked by an encouraging recovery, notably in containerized trade with Asia and in the handling of certain dry bulk commodities such as iron ore and grain.

Lastly, the cruise season was entirely cancelled in compliance with Transport Canada directives.

It should be noted that these preliminary results will be audited and officially released in their entirety at the MPA’s annual meeting in May.

Watch the arrival of the ship:
';

About the Gold-Headed Cane

The Gold-Headed Cane is awarded to the master of the first ocean-going vessel to reach the Port of Montreal without a stopover in the new year. Until 1964, the Gold-Headed Cane was presented in the spring to herald the resumption of navigation, as Montreal was cut off from the world during the long winter months. Since the advent of icebreakers, which allow year-round navigation, the cane has been awarded at the start of each year. It has always been a trophy coveted by the captains of many countries.