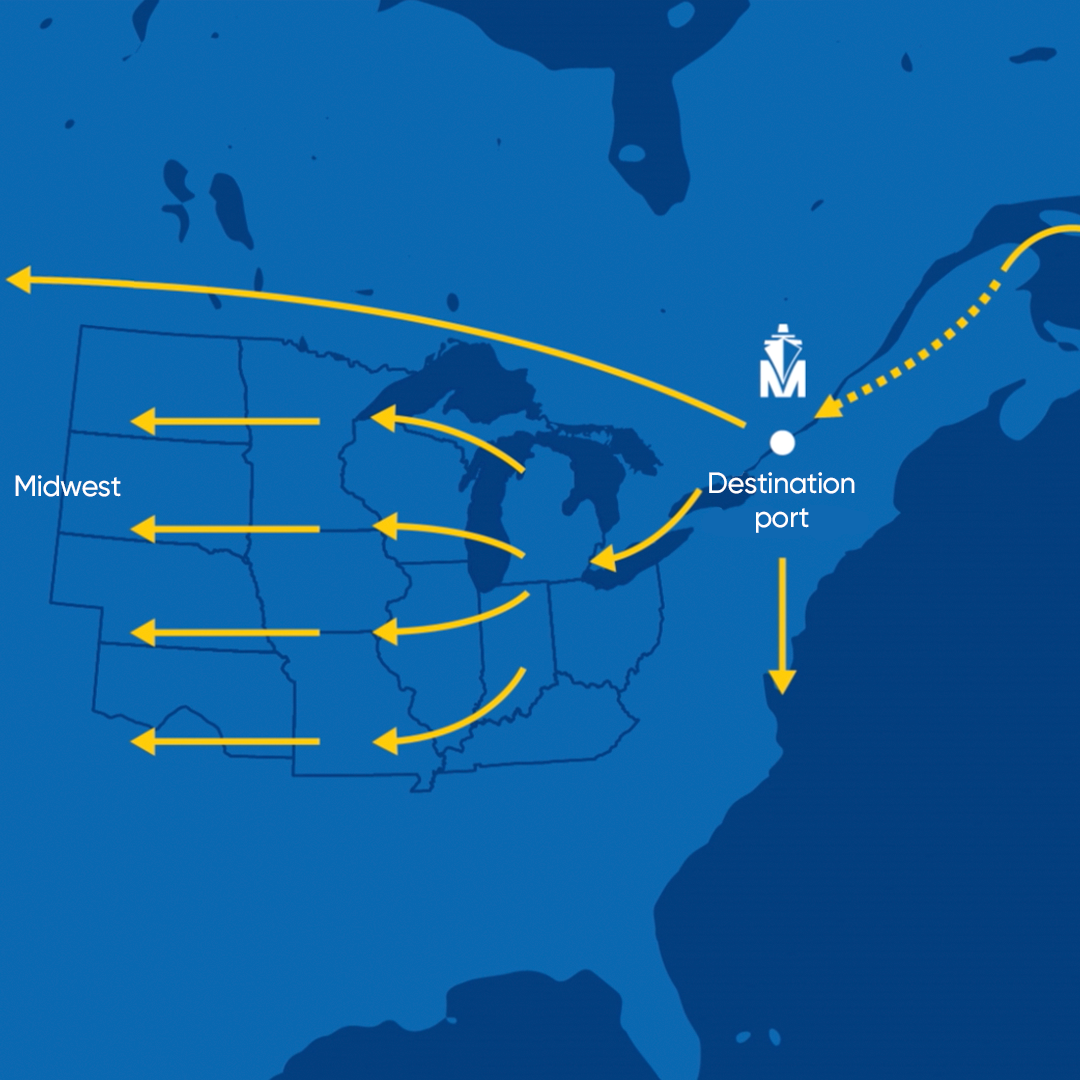 There’s Only One Destination Port in North America!

There’s Only One Destination Port in North America!

That’s right. Out of all the container ports in North America, there’s only one that has the right to be called a destination port: the Port of Montreal. Moreover, we’re the closest port to the US Midwestern market, meaning we’re within two days of 110 million consumers. Yes, you read that right. This is one of the reasons we’re the second largest port in Canada and fifth among all the ports on the North American east coast.

There are two types of ports: destination ports and ports of call. Here’s an analogy to show the difference. Think of a port of call more like waiting at a bus stop, and a destination port is more like a cab ride.

No matter how you choose to get there, you’ll get there eventually. But the bus ride has a few stops to make along the way to unload and load containers at stops before yours, and the taxi route is direct. No detours. No time wasted. And you don’t even need to tip!

Since Montreal is a destination port where ships are 100% loaded and unloaded, the result is a far better cost-effectiveness ratio for the carrier, which can mean savings for the importer/exporter.

Having the Port of Montreal strategically 1,600 kilometres inland explains a good part of our unique reality as a destination port. Imagine: we are the fastest route between Europe, the Mediterranean and North America’s industrial centre.

And since cargos spend more time on the water than on rails or roads, there are plenty of economic and environmental advantages. Ships emit the least greenhouse gases out of all transport options and are the least expensive per kilometre travelled. Proof once again that less is more.

But our leading role in the logistics chain takes its full measure once you understand the ecosystem in which we operate. The only container port on the St. Lawrence, the most important port on the Canadian east coast, we’re also at the heart of an intermodal platform recognized for its operational performance. And for good reasons, amongst which:

- we’re connected to more than 140 countries around the world thanks to the direct and transshipment services of global marine carriers like CMA CGM, COSCO, HAPAG-LLOYD, MAERSK, MSC and OOCL.

- our 100 km network of on-dock railways directly linked to the Canadian National (CN) and Canadian Pacific (CP) transnational networks allows us to organize convoys at the foot of the ships while ensuring daily departures to Chicago, Detroit and Toronto.

- Even more so, we have a state-of-the-art truck traffic optimization system developed specifically for the Port. And the adoption of the TradeLens platform jointly created by Maersk and IBM allows us to optimize the planning of our operations. This is possible from the access and analysis of inbound traffic data via blockchain technology.

A formula that keeps optimizing

All in all, here’s what makes us a leading player in the logistics industry for North America, Europe and the Mediterranean:

And we’re not stopping there!

Even with our key position and all our distinctive advantages, we refuse to rest on our laurels. We choose to keep innovating! It’s what we do. We’re already working on several projects that will allow us to improve the performance of the Port of Montreal over the coming years.

Just think of the new Contrecœur terminal, the construction of a viaduct above Notre-Dame Street that will allow trucks to directly reach the highway network, and our active participation in global discussions on Industry 4.0 such as the Smart Port: Piers of the Future conferences, the international chainPORT grouping and the European ePicenter project.

The Port of Montreal is the only destination port in North America, and it’s a smart port on top of that. Two advantages that are ultimately made to help you. Smart, don’t you think?