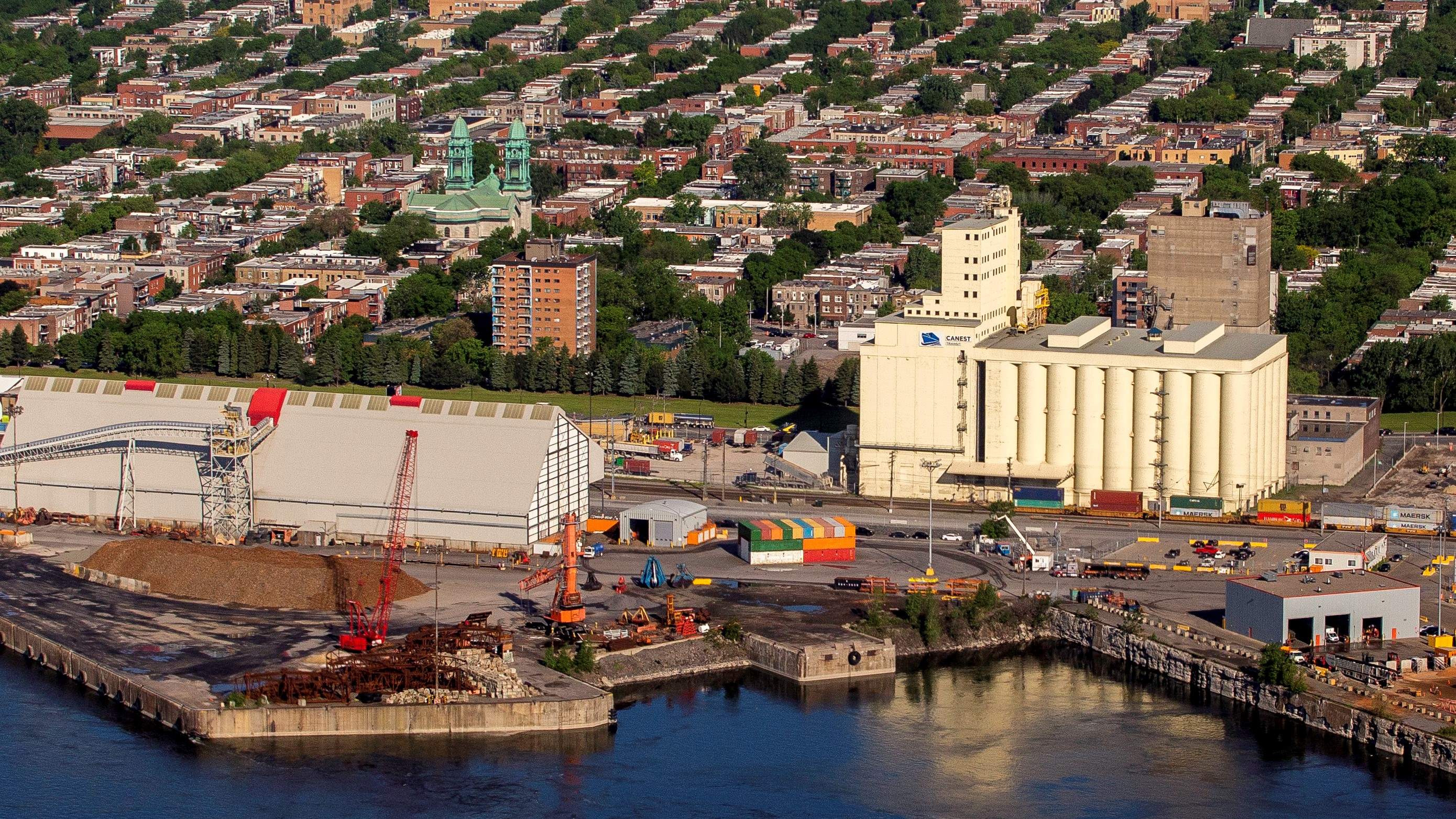 Soy milk, tempeh, miso, edamame, tamari, soy pudding and every form of tofu have all made their way onto our grocery shelves in recent years, and reflect the changing nature of our eating habits. Less meat, fewer dairy products... At the Port of Montreal, these changes in habits do not go unnoticed!

In a city once regarded as a wheat capital of the world, with its huge elevators that have been part of the urban landscape for over a century, soybeans now rank at the top of the containerized grain sector. Every year, 800,000 tonnes of soybeans are handled annually, in bulk or in containers.

CanEst, a company that specializes in grain containerization and is located on Notre-Dame south of Joliette Street, has experienced this growth in usage head-on. “When I started in grain twenty-five years ago, Quebec produced between 150,000 and 200,000 tonnes of soybeans a year,” said Carl Boivin, General Manager at CanEst. “Today, more than a million tonnes of soybeans are produced annually.”

Occupying the premises of former Silo No. 3, erected in 1923, the company saw the balance shift in 2017, when soybeans replaced wheat in containerized grain volumes. Today, sixty percent of CanEst’s volume is soybeans. About 6,000 containers of soybeans leave from CanEst, mainly for Asia, traditionally to China, and more recently to Vietnam, Indonesia and Malaysia.

In all, there are between 6,000 and 7,000 soybean producers in Quebec, mainly in the central regions of Montérégie and Centre-du-Québec. Many of them, along with producers from Ontario and even Manitoba, are sending their production to the Port of Montreal for access to international markets, whether by rail or truck depending on the distance they have to travel.

What makes Quebec soybeans successful for export? “Our soybeans look great—whiter, lighter and less spotty than soybeans from the southern United States, for example,” said Carl Boivin. The type of soil has something to do with it, as well as the climate. “Canadian winters have a bright side. By spring, not many diseases are left in the fields!”

But take heed, soybeans require a series of precautions. That’s because it is an allergenic product, so equipment that comes into contact with soybeans is subject to a special cleaning process. “We want to prevent the wheat that goes through our facilities from leaving with traces of soybeans.” In addition to the four different varieties of soybeans containerized at CanEst, they handle corn, lentils, peas, mustard seeds and, of course, many varieties of wheat. Consequently, the handling system must be purged and cleaned to ensure that there is no contamination before equipment and conveyors are inspected. “Since we have three receiving pits, we manage to reserve each pit for a specific type of product to avoid wasting too much time in cleaning processes.” Fortunately, the company has ninety elevators, enough to provide each grain variety with its own unique storage location.

It is also important to ensure that transgenic and non-transgenic soybeans never come into contact. “Logistically, the plant must be prepared for the reception of transgenic or non-transgenic products.” When they arrive, the soybeans are tested to determine what type they are. They go through the in-house laboratory, get crushed and immersed in a solution. We also check their moisture: soybeans that are too wet will be prone to mould. In that case, the truck is immediately rejected and returned to the producer, who is liable for drying them.

They then go to cleaning: the seeds pass through large sieves connected to a suction system to sort out as much dust, hulls, stones and soil residue as possible.

After that, they are containerized. To do this, the soybeans are loaded into a container placed vertically to maximize the quantity inside. To prevent the load from spilling when the container doors are opened, a cardboard wall is inserted at the top to seal the cargo. Once the container is full, it is put on a truck that then heads to a port terminal.

A few months later, the contents will be found on our grocery shelves in the form of vegetable oil, tofu, soya dessert and much more. 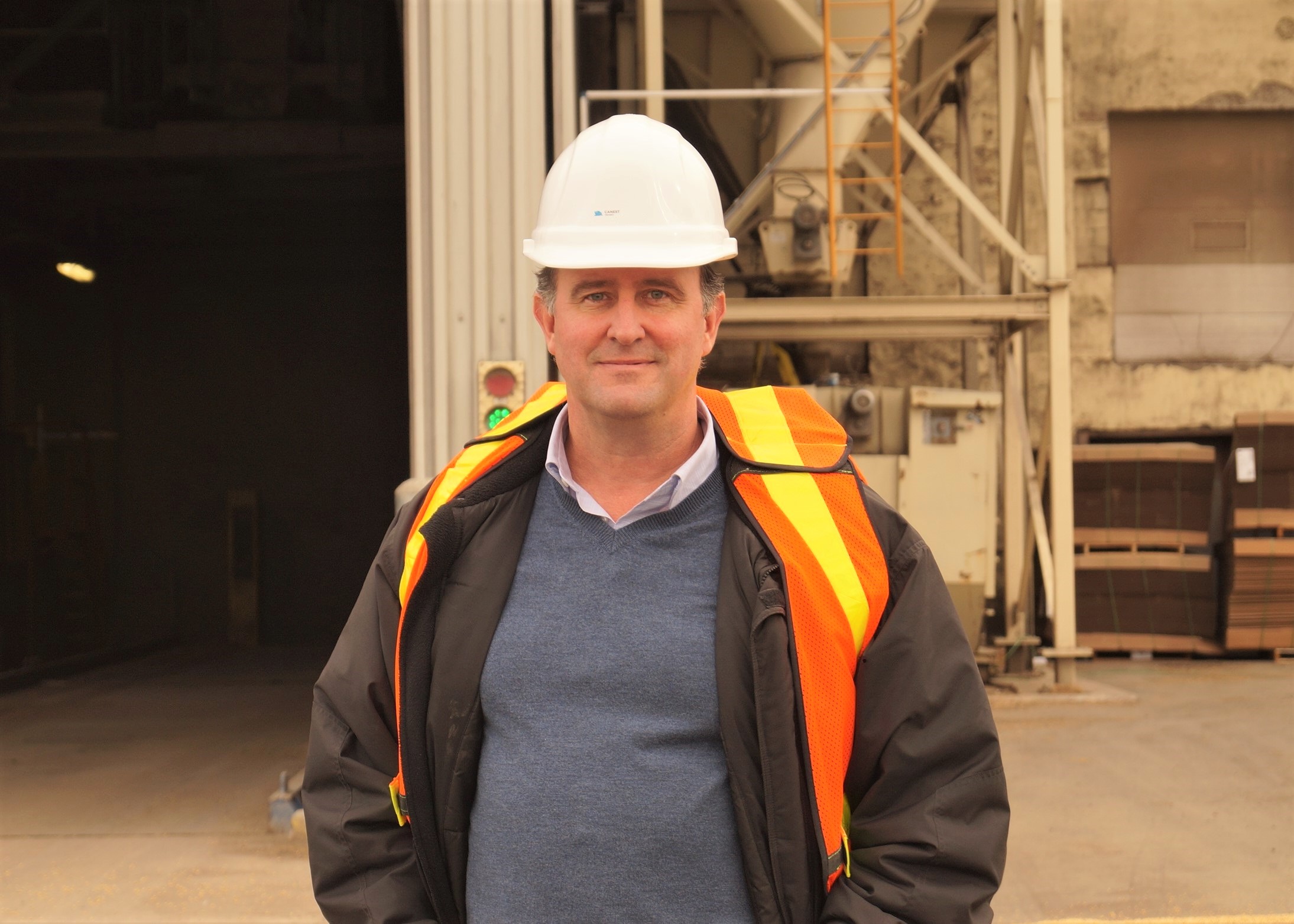 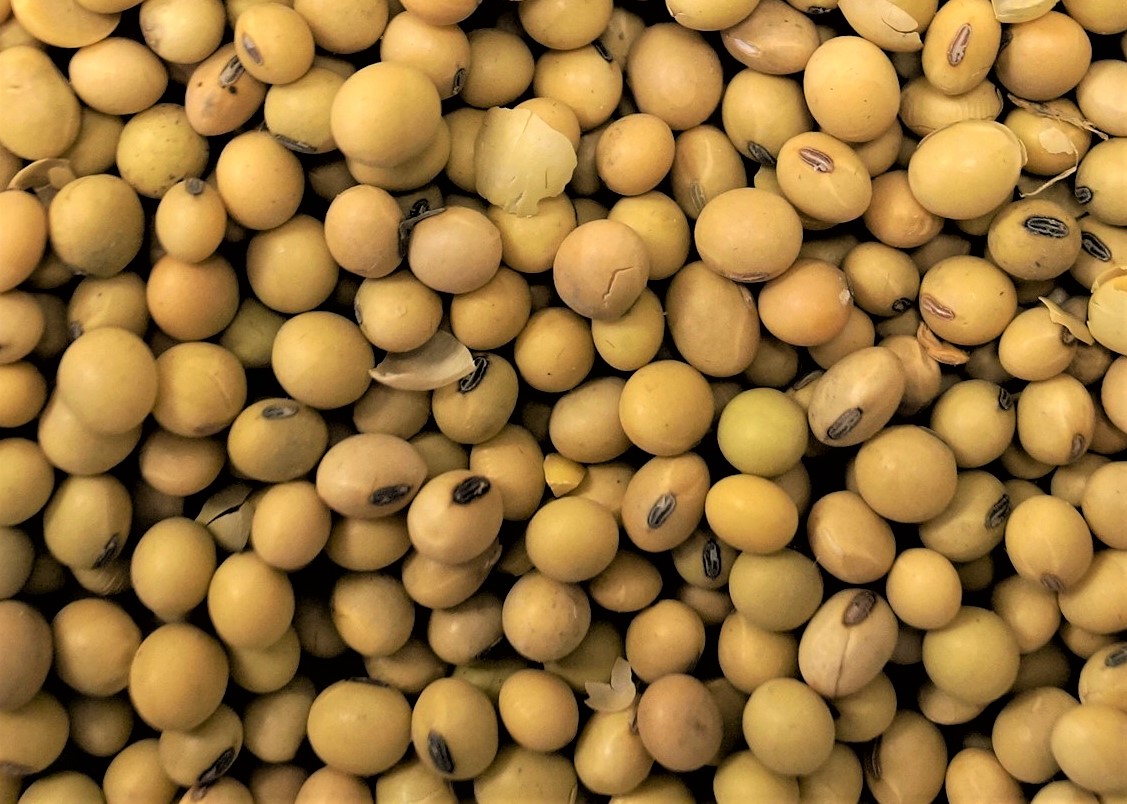 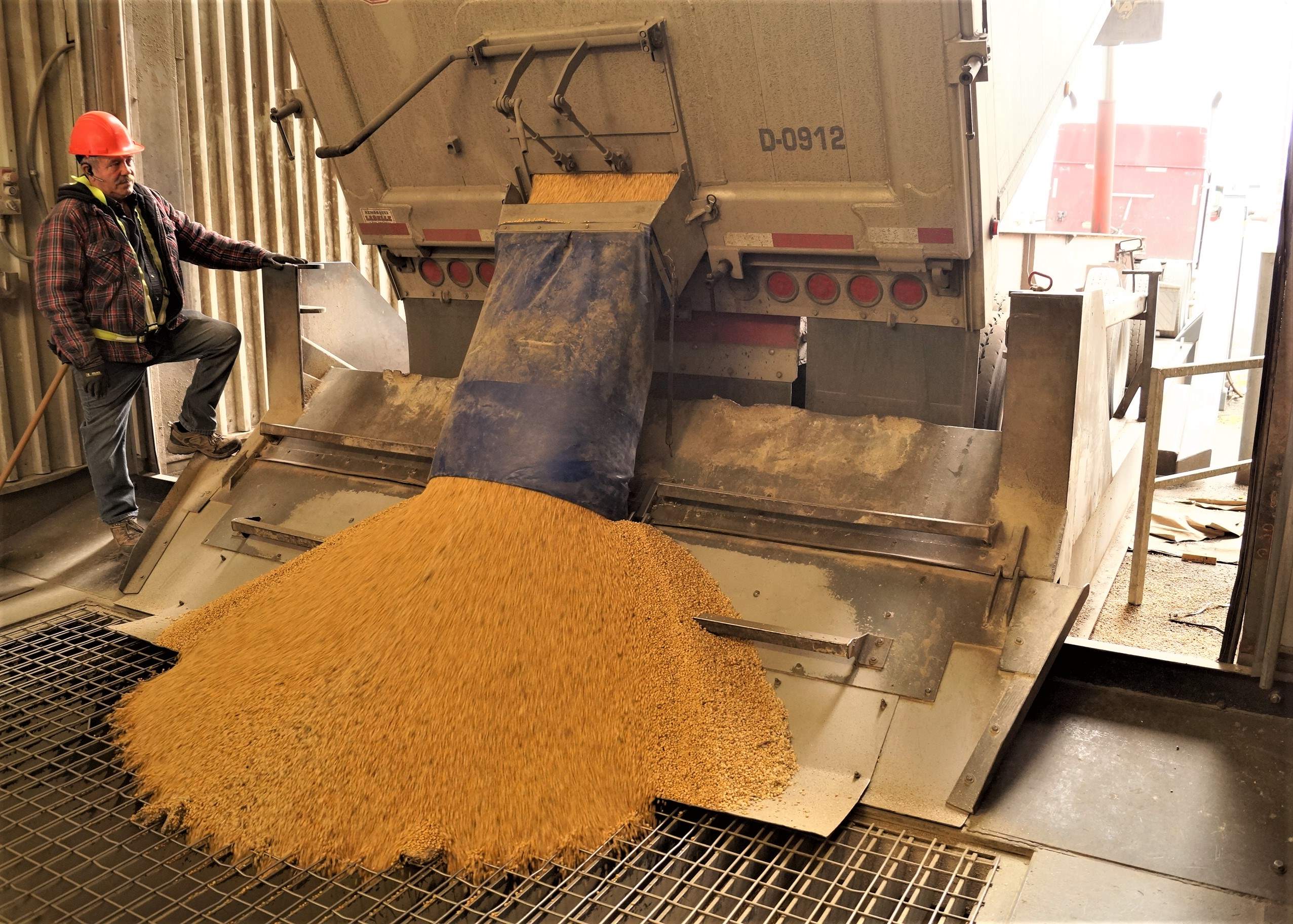 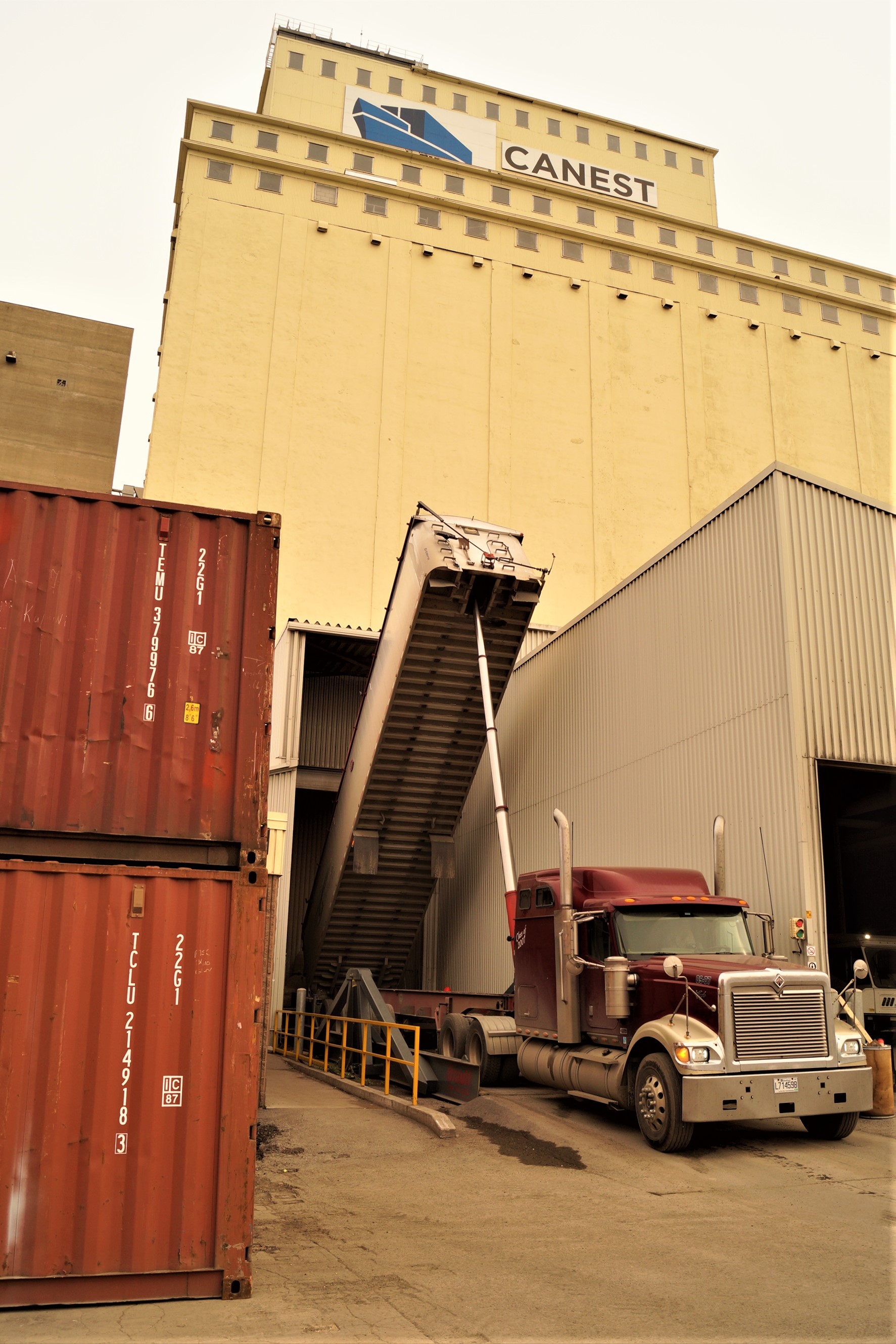