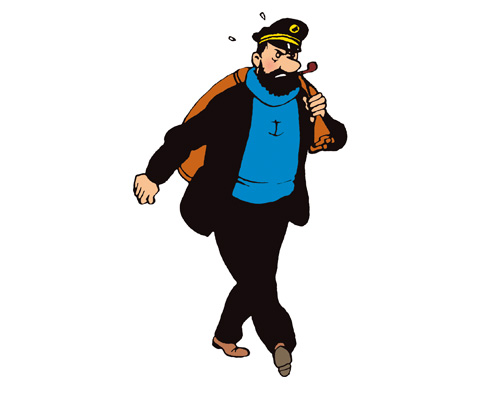 With his merchant marine captain’s hat, the anchor on his sweater and his nautical vocabulary, Captain Archibald Haddock is one of Tintin’s best friends in the Belgian comic book series Les Aventures de Tintin, making him an iconic seafarer around the world. But what’s behind those expressions of his?

Mille sabords : One of Captain Haddock’s favourite curses, used in countless situations... On a warship, sabords are the holes in the side of vessels for cannon muzzles. It’s the noun of the verb saborder, to scuttle, as in to voluntarily put holes in your vessel to make it sink so the enemy can’t get it, making this curse express both a ready-to-fight spirit and a really grumpy mood!

Marin d'eau douce : Compared to a sailor of the high seas, a marin de haute mer, who bravely faces swelling waves and tides, a sailor of rivers and lakes, a marin d’eau douce, has it easy. The implication is that a freshwater sailor is mediocre and inexperienced, who by the same stroke deserves nothing but contempt from a seaworthy captain…

Tonnerre de Brest : Of all the port cities in Europe, few are as emblematic as Brest, renowned for both its military port and its Naval Academy, where generations of mariners have trained since 1752. Opinions differ on the origin of the expression, but it is widely associated with the cannon shots fired from the arsenal morning and night for nearly three centuries. Captain Haddock uses it as an expletive to say, and this is putting it mildly, “hang it all!” or “darn it all!”

Flibustier : A freebooter, one of the original pirates of the Caribbean, a member of a pirate association that scoured the coasts and plundered Spanish possessions, in the 16th, 17th and 18th centuries. By extension, a flibustier is a swindler, a bandit or even just a small-time crook: an individual without faith or law, so most disreputable!

Amiral de bateau-lavoir : A washboat, bateau-lavoir, was more of a floating laundromat than an actual ship. Always moored at the dock, washboats featured one area to wash clothes and another to dry them. They disappeared with the advent of the washing machine. To call someone the admiral of a washboat is a historic insult!

Naufrageur : A shipwrecker who causes vessels to sink by sending misleading signals to the crew, so they can then plunder them. By extension, it is someone who causes the total ruin of something. When Captain Haddock calls someone a naufrageur, he is calling that person a disgrace!

Frère de la côte : Literally brother of the coast, this was the name of a brotherhood of freebooters and buccaneers based on Turtle Island under the authority of a French governor in the early 17th century. By the time Éditions Robert Laffont published its dictionary of the sea, frère de la côte had come to mean an unscrupulous but loyal and faithful sailor.

Moussaillon :  Right at the bottom of the crew’s hierarchical ladder is the moussaillon, a young cabin boy or apprentice sailor ranked lower than an apprentice able seaman, who in turn is lower than a third class seaman. So, it’s the person who gets stuck doing the most thankless tasks.