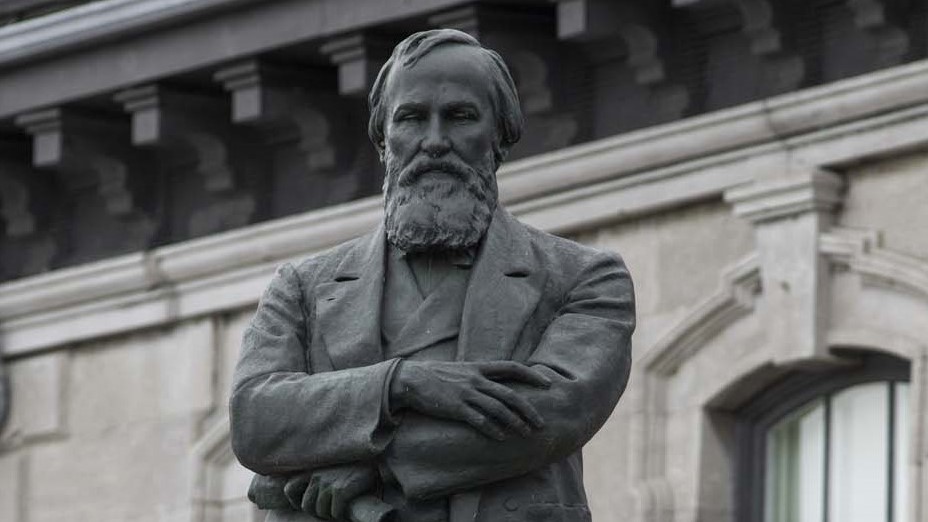 Who is John Young, the father of the Port of Montreal?

In the Old Port, in front of Allan House at 333 de la Commune Street West—an area once frequented by ships loaded with cargo—stands a bronze statue of John Young with the following inscription: “Through whose foresight, public spirit and energy, Montreal has become the national port of Canada.”

He really does deserve the title of “father of the Port of Montreal” and by the same token, the credit for having contributed to Montreal’s economic development.

Of Scottish origin, John Young arrived in Montreal at the age of nineteen and began his career in import-export as a clerk. A few years later, he became one of Montreal’s most influential businessmen, famous for his progressive ideas that were not always unanimously accepted in the more protectionist economic circles. He is also famous for his bad temper; he was responsible for many inflammatory speeches and letters in the newspapers to those who did not share his ideas.

In 1853, he was appointed chairman of the Harbour Commission, a position he held until 1866. During this time, he worked to improve the accessibility and efficiency of the port and launched several major projects. His goal: that trade in the St. Lawrence, the Ottawa River and the western United States would now pass through Montreal.

- He had a channel excavated in the St. Lawrence River to allow large ships to travel to Montreal.

- He had docks built in the current Old Port.

- He had the Lachine Canal widened.

- He introduced the railway to the port territory.

- He had the Victoria Bridge built to extend the railway from the south shore to the Port.

When he died in 1878, the Port extended from the Lachine Canal to Hochelaga Quay in the east, and the railway had been operating there for seven years. To prove the effectiveness of his projects, it should be noted that the port received 259 ocean-going vessels in 1860, compared to 574 the following year! Unfortunately for him, business declined from 1860 onwards and he was only saved from poverty at the end of his life by the support of his friends.

Do you have any questions about the Port of Montreal or its activities? Let us know at This email address is being protected from spambots. You need JavaScript enabled to view it. and we’ll get back to you.