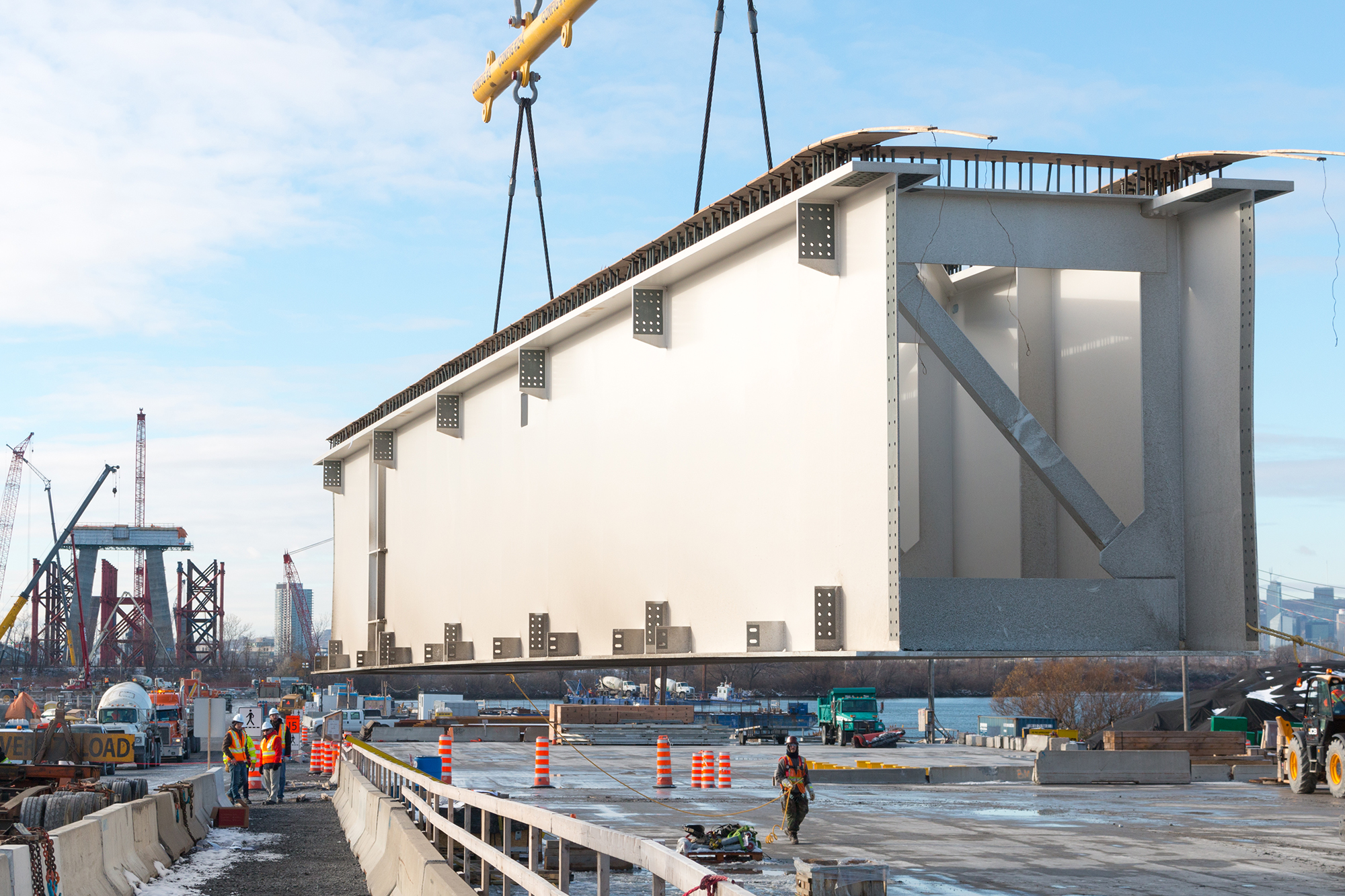 New Champlain Bridge goes through the Port of Montreal

Even with millions of tonnes of cargo passing through the Port of Montreal every year, we have rarely faced a logistics challenge as impressive as the thousands of oversized pieces for the new Champlain Bridge.

One of the largest worksites in North America, the new Champlain Bridge is made of more than 1,300 non-standard pieces, 9,600 concrete deck slabs made in several factories in Quebec and 204 oversized pieces from Spain. “A great logistics challenge,” said Alexandre Demers, Director, Procurement, Contract and Material Management at SSL (Signature on the St. Lawrence) who coordinated the logistics and shipping of these non-standard materials. In all, some 35,000 tonnes of bulk, oversized steel made it to the Port in about two years.

Among the biggest challenges identified are the 158 pieces of steel that make up the superstructure of the cable-stayed bridge and the 37 header joists that connect the vertical supports and the superstructure, all from the three Spanish companies Megusa, Tecade and Dizmar. The header joists are huge W-shaped lateral beams on which the three traffic lanes will be built, each beam weighing 400 tonnes and measuring 52 metres long. The first models departed from the Port of Seville at the end of March 2016 and arrived two weeks later at the Port of Montreal. Until the end of summer 2018, a transatlantic vessel specially chartered by SSL for the project had to sail nonstop to complete one round trip per month. “A bold and unique initiative to manage all the logistics involved, from loading in Spain through to delivery to the final destination,” said Alexandre Demers.

Adapting to all contingencies

Once the pieces manufactured, the team considered all modes of transport to move them to the site. “Depending on the origin and destination of the pieces to be transported, as well as on the weather and on our schedules, we chose marine, rail or road, or a combination of all three.”

So for the pieces going through the Port, the team chose a barge shipping system that makes it possible to go upstream. “To access the site, the way is not easily navigable. We’re talking about strong current with not much water, especially at this time of year.” Tugboats designed to navigate in very shallow water, and a system with a 2-km cable and a winch pulling the barge overcame the obstacles.

The challenges keep right on coming, especially at the whim of the weather. “There’s really a constant evolution in the logistics of a project of this magnitude. Whether it’s the weather, the unexpected or the change of season, you always have to be ready to adjust. Depending on the weather and the schedule, you can choose to dock or unload directly on the barge.” And in every case, they had to be ingeniously resourceful to get the header joist to rotate from the horizontal position to the vertical position so that the installation could be done in complete safety. Furthermore, winter does not make things any easier. “To save time at the worksite when the seaway was closed, we used the Port of Montreal’s facilities to pre-assemble and work on the steel header joists.”

July 2018 marked the completion of installing the header joists and the manufacture of the superstructure components of the cable-stayed portion of the bridge, two major stages before taking on the next, the installation of 600 box girders manufactured in Quebec City by CANAM and its subcontractors. At 35 metres long, 3 to 4 metres wide and weighing 40 to 80 tonnes each, altogether 44,000 tonnes of these parts were unloaded at the Port by cranes, and reloaded onto barges to move to the site. That was a whole other set of logistics to set in motion…

A quick assessment of this vast complicated site? “We are very impressed with the way the teams worked together. We are very satisfied and proud of what has been accomplished. In the end, it’s a great story of partnership and coordination, and quite a logistics challenge carried out brilliantly and with ingenuity! 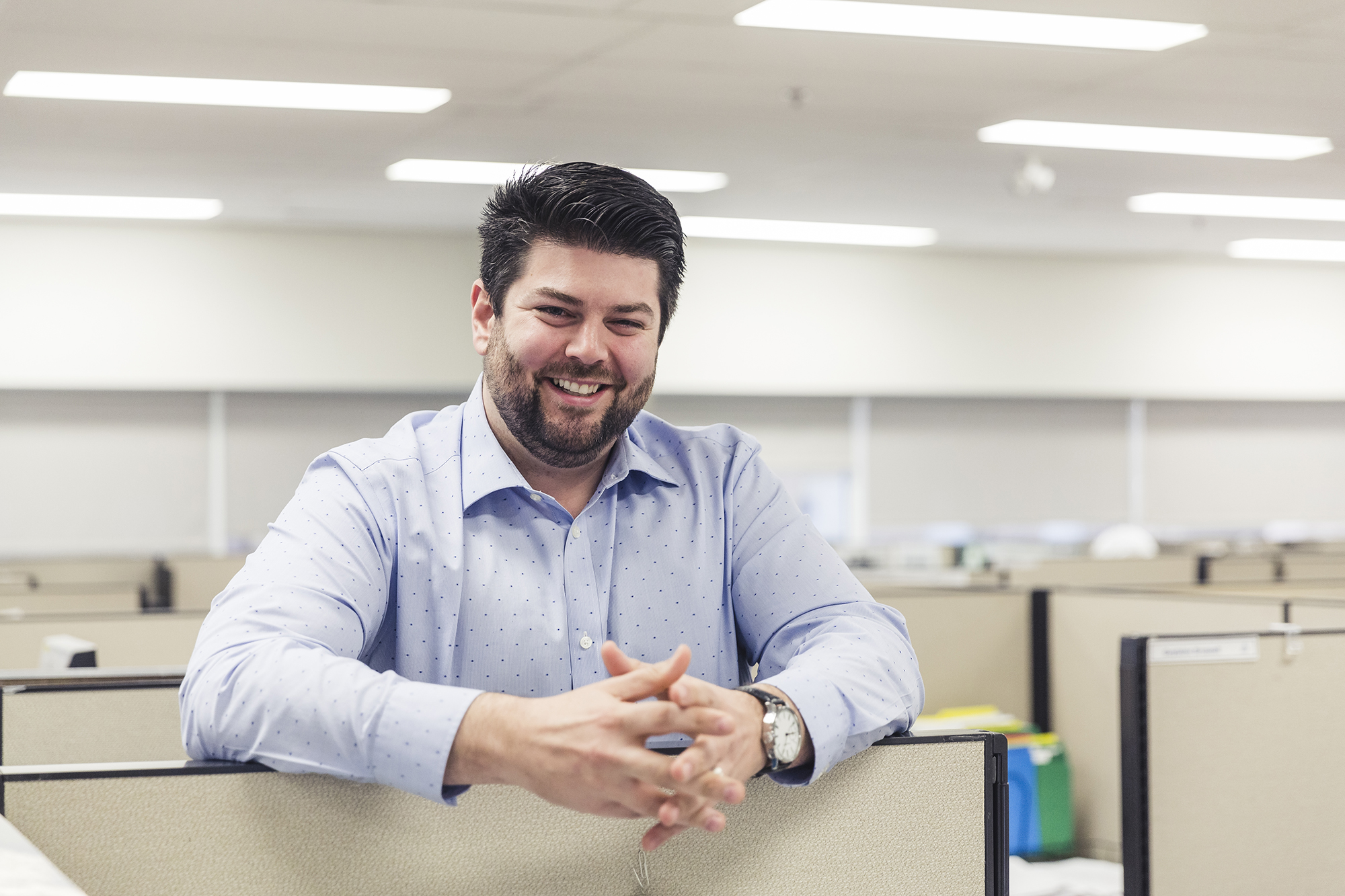 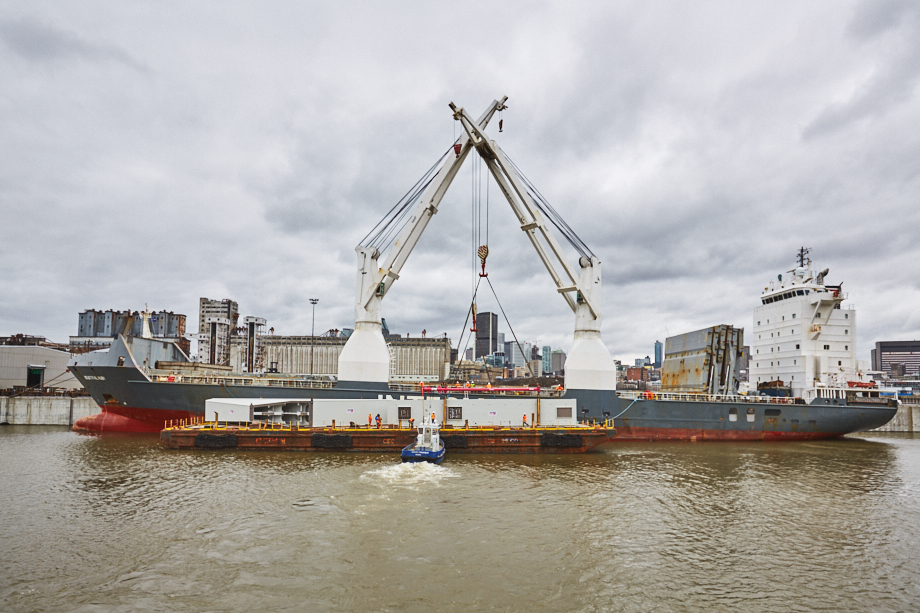