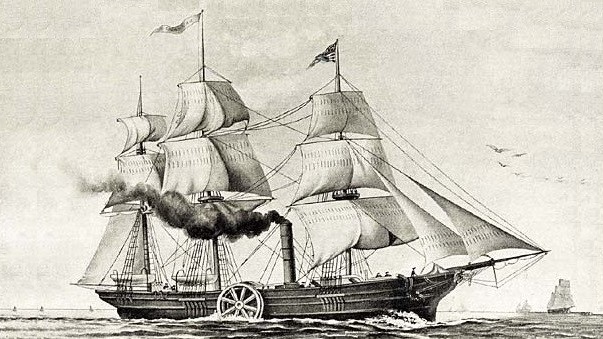 Once upon a time, sailboats and steamboats co-existed in large numbers on rivers and oceans, by sail, à voile and by steam à vapeur.

When the first steamboats appeared at the end of the 18th century, almost all of them were equipped with one or more masts to compensate for any engine failure.

For example, in 1819 the Savannah is famous for being the first steamboat to cross the Atlantic. It set sail from Liverpool and 27 days later, it reached the Port of Savannah, after using its sails for more than half of the trip.

Building ships with masts diminished as engines improved, and disappeared entirely towards the end of the nineteenth century.

Today, the term être à voile et à vapeur figuratively refers to bisexuality. This origin of this meaning is the fact that seafarers went out to sea for long periods of time and there were only men aboard—who went from homosexuality at sea to heterosexuality on land when they returned.