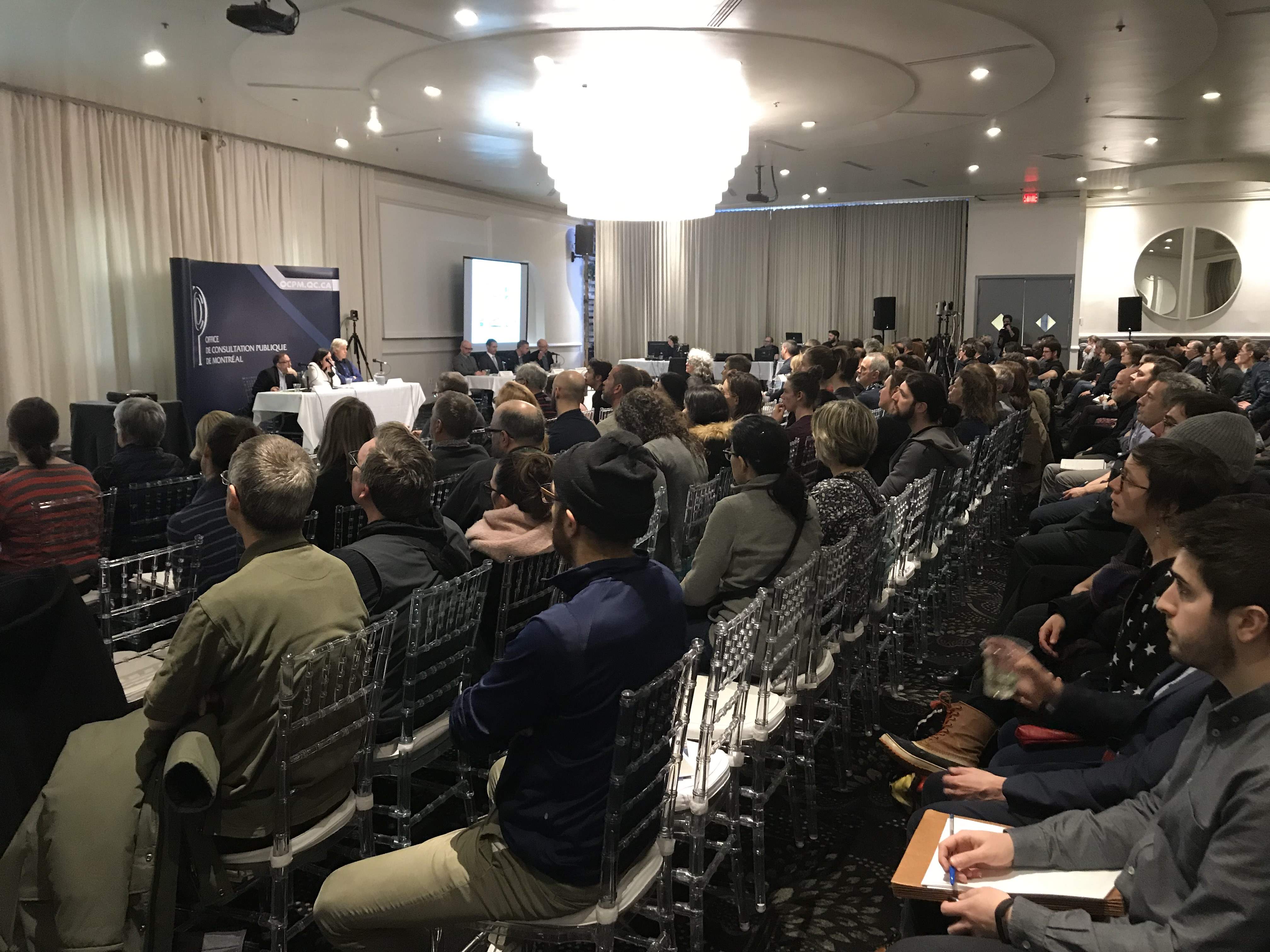 Transparency, communication with our neighbours and collaboration are high on our list of priorities. Over the past few years, the MPA has held its own public meetings and participated in several public hearings, including those of the Office de consultations publiques de Montréal (OCPM), in connection with its development projects or the redevelopment of certain sectors near its facilities.

The residents and organizations concerned are invited to attend and give their opinion on the targeted issues and proposed projects, and to share their concerns and suggestions during these consultations. We’re listening!

The Port of Montreal took part in the public hearings held by the Canadian Environmental Assessment Agency (CEAA) to present the results of the Environmental Impact Assessment for its Contrecœur Terminal project.

Among the themes addressed during these hearings, attended by a few hundred people, were road and rail traffic, the economic benefits, fish habitat, special-status species, impact on wildlife and plants, shipping operations, noise, the visual environment and air quality.

More on the consultation (French only): http://ocpm.qc.ca/fr/consultation-publique/amenagement-site-contrecoeur/documentation

More on the Contrecœur Terminal project.

Affecting the eastern part of downtown Montreal, this consultation addressed the reconfiguration of the Ville-Marie Expressway (A-720) and Notre-Dame Street, the creation of new links to the river, the layout of approaches to Jacques-Cartier Bridge, and what happens to the Molson-Coors brewery site, Maison Radio-Canada and large vacant lots.

More on the consultation (French only): http://ocpm.qc.ca/fr/faubourgs

More on the project to increase rail capacity.

Another consultation on the same area took place in 2020 : https://ocpm.qc.ca/fr/ppu-faubourg.

The Port of Montreal filed a written opinion on this matter.

Located in Hochelaga-Maisonneuve, this sector bordering Port of Montreal territory will be the subject of major requalification and development over the next few years. The objective is to rethink the territory and attract new businesses, while promoting sustainable development and better cohabitation with residential areas.

The MPA is directly involved in this file, as it has a road link project over Notre-Dame Street aimed to allow more direct truck access to the terminals and reduce traffic on the local road network.

More on the consultation (French only): http://ocpm.qc.ca/fr/assomption-sud

More on the road link project.

This 2.3 square-kilometre area straddling the Sud-Ouest and Ville-Marie boroughs includes the approaches to the Champlain and Victoria bridges, the Pointe-Saint-Charles business park, the St. Lawrence shoreline, the Peel and Wellington basins, Cité-du-Havre, Pointe-du-Moulin and Bickerdike Pier.

More on the consultation (French only): http://ocpm.qc.ca/fr/bridge-bonaventure

More on the redevelopment of Bickerdike Terminal.

The Montreal Port Authority invited its local and regional stakeholders to an information meeting to update them on the Contrecœur Terminal project. Topics discussed included the environmental assessment, ongoing analyses, and current and future steps.

At the Office de consultation publique de Montréal's consultation on the L'Assomption - Longue-Pointe sector in the spring of 2019, the Port of Montreal announced that a public information meeting would be held soon on its road link project.

Accordingly, residents were invited to participate in a public meeting to learn more about the project and its state of progress. It was also an opportunity for participants to get answers to their questions and make comments.

Economic development vision of the territory

The Port of Montreal filed a written opinion on this matter.

The MPA invited the public to an information session on the Port of Montreal's expansion project in Contrecoeur. During the meeting, the commitments of the MPA for the realization of the project, the compensation plans and the next steps were presented.