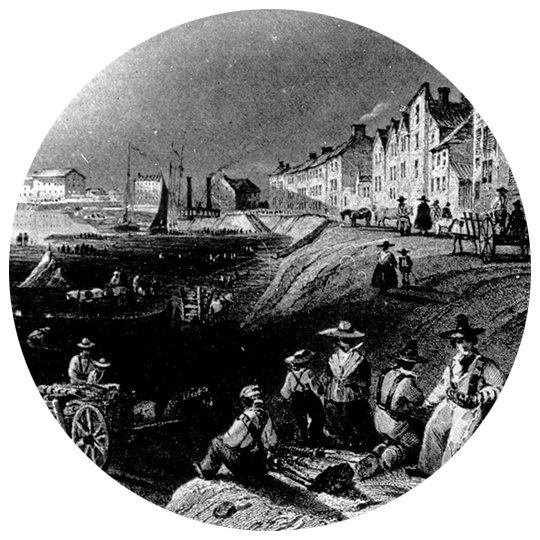 The Port of Montreal is a privileged witness to the creation of Montreal, its economic development and the arrival of immigrants to the city. Here are the milestones of its rich history.

Jacques Cartier explores the island of Montreal, home to the city and the Port of Montreal.

Samuel de Champlain arrives on the island and finds no trace of the Huron village of Hochelaga that had welcomed Jacques Cartier.

For almost two centuries, the Port of Montreal mainly serves canoes, flatboats and barges used in the booming fur trade. French sailboats, and then English, supply the colony. Montreal really begins to gain prominence as a port city at the beginning of the 19th century with the arrival of the steamship.

Creation of the first Harbour Commission. The commissioners build the first permanent wharves and press the government to dredge the river.

Circa 1840, awarding of the first Gold-Headed Cane, a ceremony that would become a tradition.

Work is completed to increase the navigation channel’s depth to 4.88 metres (16 feet) and its width to 76.19 metres (250 feet) between Montreal and Quebec City.

The first locomotive arrives on Port of Montreal docks.

Start of electric lighting in the Port.

The navigation channel is dredged to 7.5 metres (25 feet).

New stone walls are built along the length of the harbour and new piers are planned.

Construction of modern grain elevators begins at the Port.

Alexandra Pier was built. At that time, the pier was surrounded by grain terminals and the Port of Montreal was the largest grain port in the world.

The federal government forms the National Harbours Board, ending the Harbour Commissioners’ regime and putting the Port of Montreal under the Board’s jurisdiction

Over 25 shipping companies serve the Port of Montreal seven and a half months of the year.

In the 1960s, boat trips became increasingly popular and more and more passengers stopped in Montreal. To welcome them better, the Port of Montreal decided to replace the existing reception buildings with new infrastructures.

The federal government uses icebreakers between Montreal and Quebec City. This initiative is taken mainly to prevent the ice jams that caused major flooding in Greater Montreal and Lake St. Pierre every year.

Danish cargo ship the Helga Dan becomes the first vessel to reach the Port in early January, marking the start of year-round navigation in Montreal.

The Port handles its one-millionth container.

The Port of Montreal expands and handles more and more containers in Montreal East.

Creation of the Montreal Port Corporation, a port corporation reporting to the federal Transport Minister and exercising considerable autonomy. Its board of directors is made up of businesspeople from Greater Montreal.

For the first time, the Port handles more than five million tonnes of container cargo in a single year.

Two brand new container ships, each with a capacity of 2,300 20 TEUs (20-foot equivalent units), are christened in Montreal.

Two shipping lines take delivery of three vessels each with a carrying capacity of 2,800 TEUs (20-foot equivalent units). The largest on the St. Lawrence, these ultramodern container ships were

specially designed for the river and due to advances such as electronic navigation, are among of the safest.

A project for the selective dredging of shoals over 2% of the surface area of the channel bed between Montreal and Cap à la Roche, downstream from Trois-Rivières, increases the minimal depth of navigable waters to 11.3 metres (37 feet).

Termont Montreal Inc., the stevedoring company that operates Maisonneuve Terminal, acquires the first post-Panamax gantry crane on the Port of Montreal. These gigantic cranes can lift two TEUs at a time and have a 65-tonne capacity.

The Port of Montreal reaches a milestone in its growth by handling more than 25 million tonnes of cargo.

For the first time, the Port of Montreal receives the Stena Paris, a 40-metre wide, new-generation P-MAX tanker.

Electronic navigation is implemented from Montreal to the mouth of the Gulf of St. Lawrence. This system enables the pilots who board ships to access the Canadian Coast Guard's MARINFO portal from their laptops and to obtain, in real time, information such as the status of the navigation channel, the position of shoals and navigation notices. Their laptops also connect with the international AIS (Automatic Identification System) shore-to-ship communication system, which provides real-time information on the vessel's precise position and an overview of other vessels in the sector.

Sylvie Vachon becomes the first woman to be appointed President and Chief Executive Officer of the Montreal Port Authority.

The Port of Montreal becomes a member of the international Green Award program and officially receives Green Marine certification.

The Port of Montreal’s Grain Elevator No. 5 and a series of adjacent properties are transferred to Canada Lands Company.

The MPA starts providing free Internet access to seafarers whose ships are docked at the Port of Montreal.

A new truck entry portal is implemented, cutting transaction time by 80% and dwell time by 50%.

The Montreal Port Authority transfers management of its grain terminal to the Albertan agri-food company Viterra.

The MPA is a driving force behind the creation of CargoM, the new logistics and transportation metropolitan cluster that aims to position Montreal as the hub of choice in Eastern Canada for freight transport.

The Port of Montreal opens to Post-Panamax vessels after authorization of vessels with a maximum width of 44 metres in the Quebec City-Montreal section of the St. Lawrence shipping channel.

The Port of Montreal welcomes the first arrival of the largest cruise ship to date, the AIDAbella, with a capacity of 2,500 passengers.

CanEst Transit inaugurates its cleaning and containerization terminal for agricultural products at the Port of Montreal.

The MPA launches projects from the Port’s Good Neighbourhood Committee.

The Port of Montreal files its Project Description with the Canadian Environmental Assessment Agency for the development of a new container terminal on its land in Contrecœur.

The Port of Montreal celebrates the 50th anniversary of the arrival of the first container.

The very first Port Centre in Quebec opens with the History of Ships exhibition, which tells the rich history of the Port of Montreal.

The Grand Quay of the Port of Montreal is officially inaugurated following the complete rehabilitation of the former Alexandra Pier and the development of new public spaces.

Start of Viau Terminal’s second phase of construction. The All aboard! exhibition is launched.