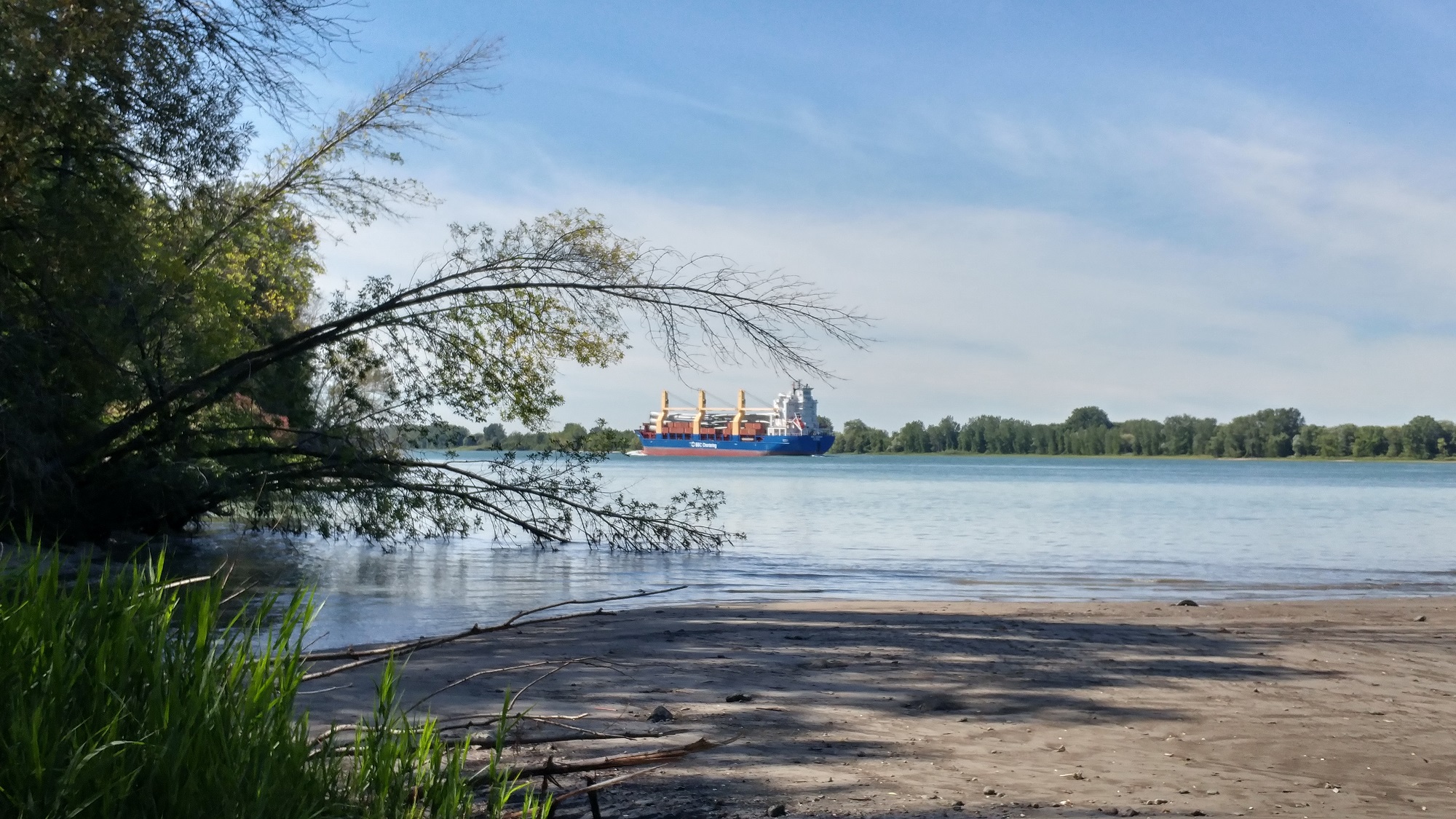 Our actions and measures for a green and blue future

In 2017, the MPA implemented an electrical power system at its cruise terminal and shore power systems for wintering ships to provide cleaner energy during their stay. It lets cruise ships and wintering vessels turn off their engines while docked, while maintaining air conditioning, refrigeration, security systems and services for the duration of their stay (an average of 10 hours for cruise ships). This new technology reduces noise, vibration, smoke and GHG emissions from diesel engine combustion gases by approximately five tonnes of GHG emissions at each connection. In 2020, 26 ships used this system, avoiding 3,200 tonnes of GHGs. 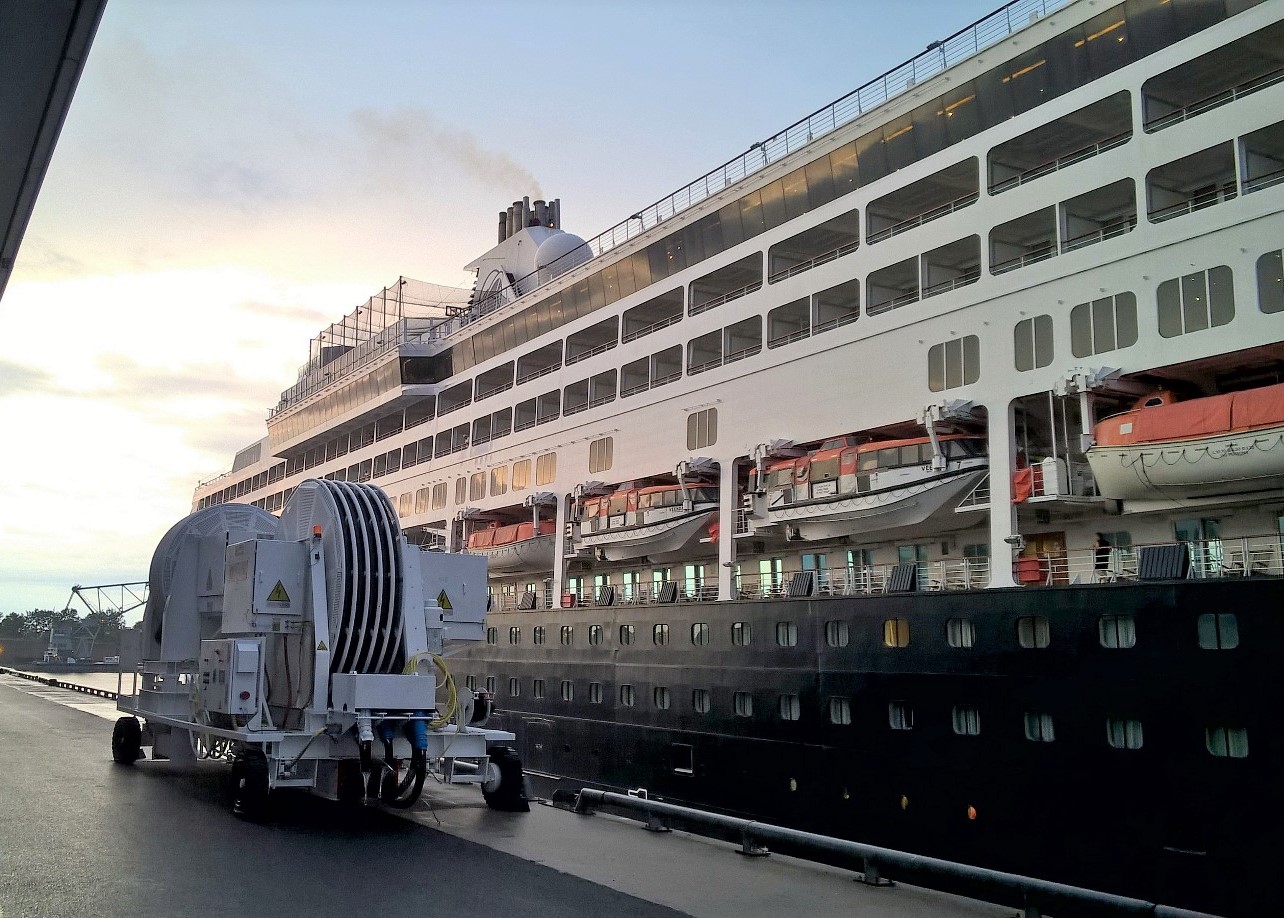 In May 2017, the Port of Montreal started to provide dockside liquefied natural gas (LNG) refuelling by truck for commercial vessels. The number of liquefied natural gas (LNG) bunkering operations increased from four in 2017 to 31 in 2020. More than 100 LNG bunkering operations carried out in less than four years prevented 30,000 tonnes of GHG emissions. 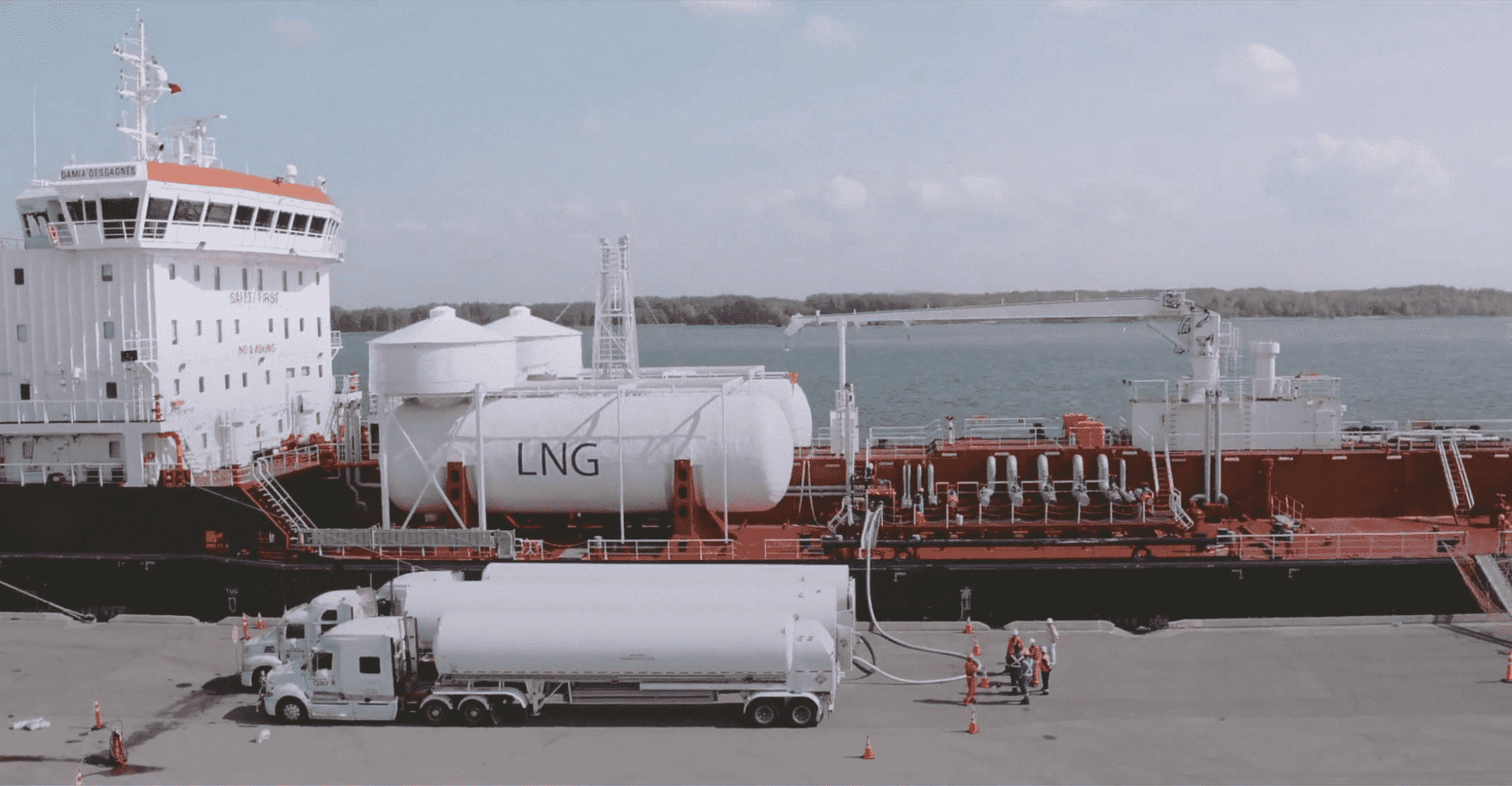 An inventory of GHGs and air contaminants throughout Port territory (Montreal and Contrecoeur) was carried out in 2010 and 2017 using the tool developed by Transport Canada for ports and licensed to Green Marine for its members. About ten terminal operators participated in this inventory, the results of which can be consulted in the annual sustainable development report. The intensity of the MPA's GHG emissions per tonne of cargo handled has been steadily decreasing for the past seven years. Since the control year 2007, it has decreased by 45%, an average of 4% per year. 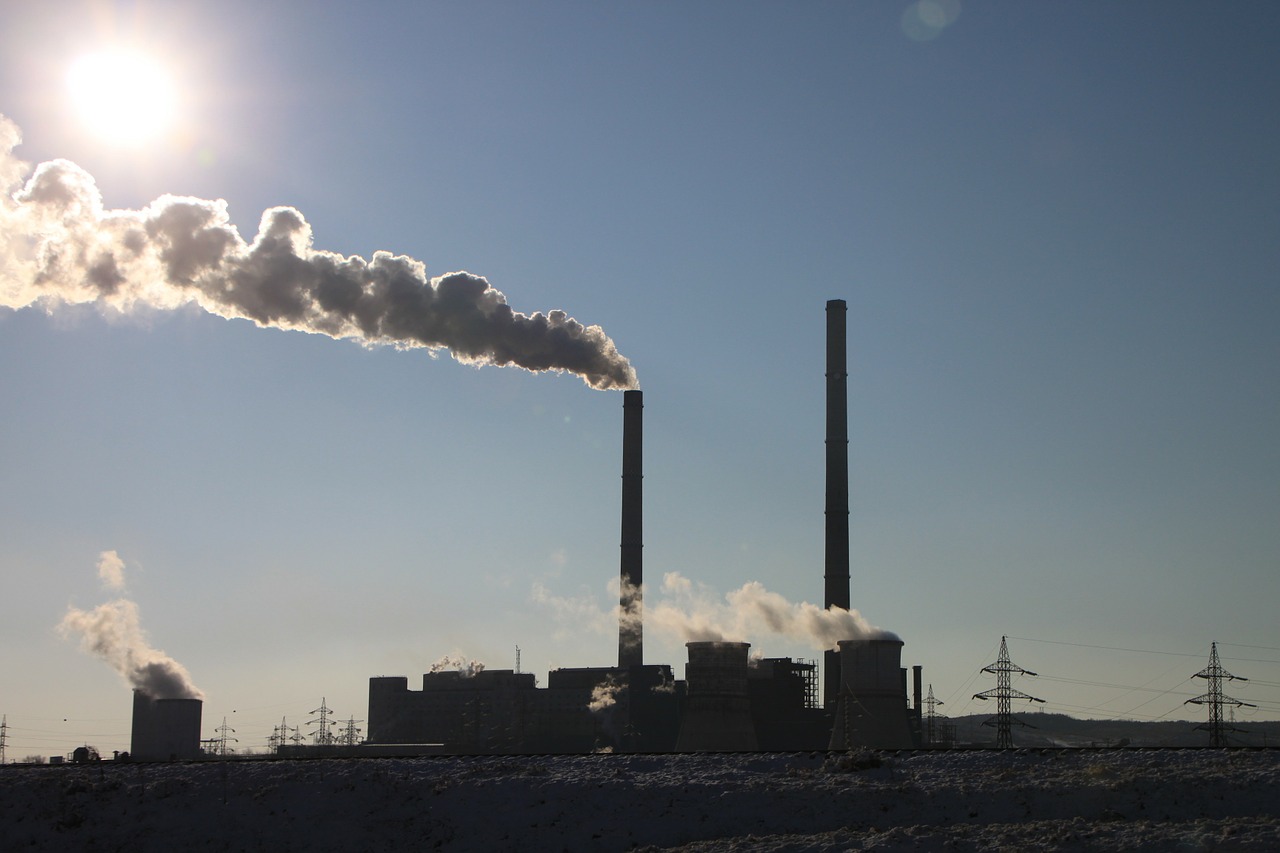 Planting of 2,000 trees within five years

The MPA pledged to plant 2,000 trees by 2024 to strengthen the canopy on Montreal territory as part of an initiative of the Greening Leaders Committee of Montreal. The MPA has been a member since 2018, and has already planted nearly 900 trees. 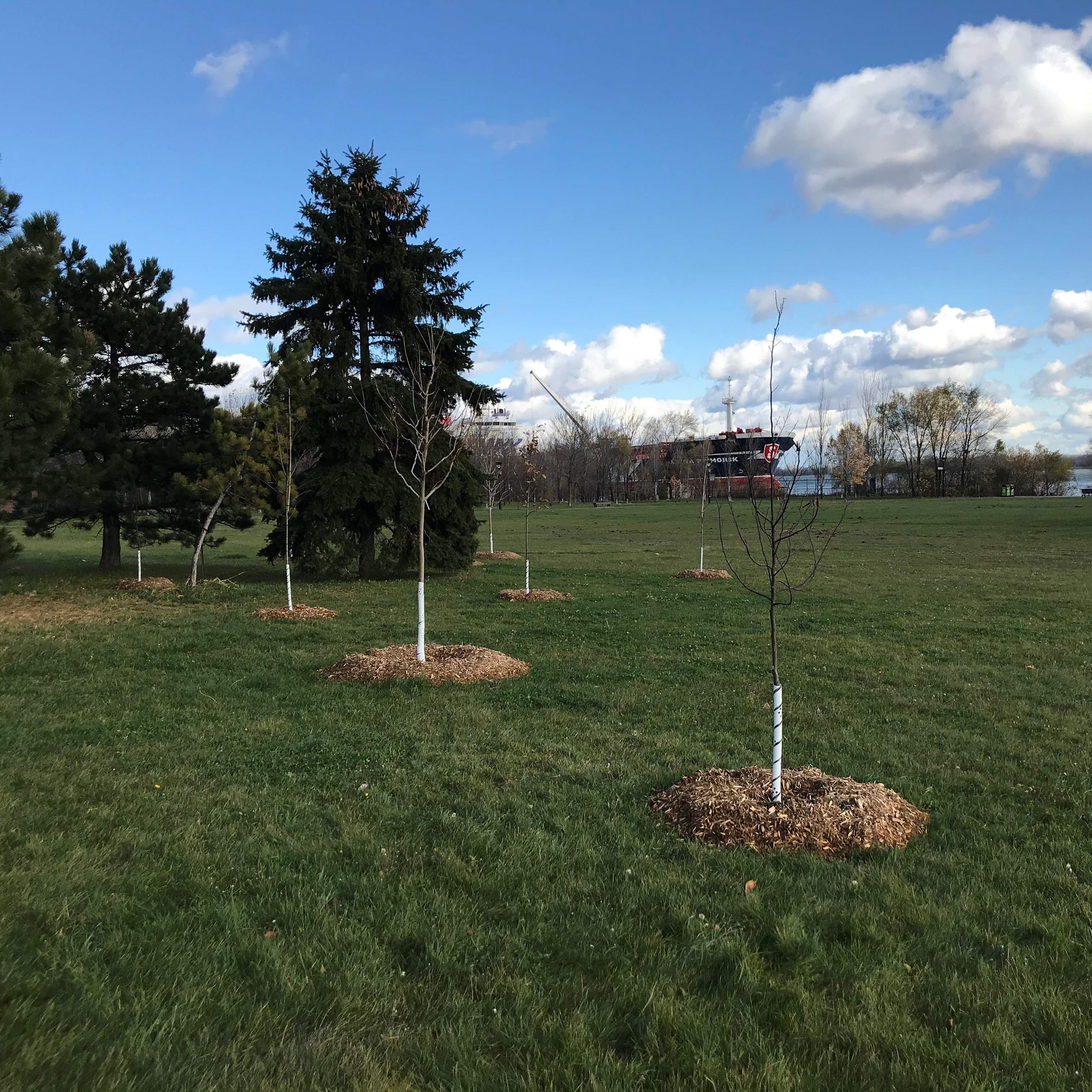 Grand Quay: 24,000 herbs, plants and flowers, and a waterfront par

After a massive makeover, the Grand Quay of the Port of Montreal was inaugurated on June 3, 2018. Formerly known as Alexandra Pier, the site has been renovated and upgraded, with significant changes to its mission and its place at the heart of downtown Montreal. Developing the green roof and the park area made it possible to replace previously concrete and unvegetated surfaces with vegetated surfaces. It is noteworthy that the project to upgrade the MPA’s Grand Quay won the prestigious Corps Public award at the Gala Montréal durable. It was singled out for its positive impact in terms of sustainable development through its landscape planning, its shore power system and its approach to connecting with the community. 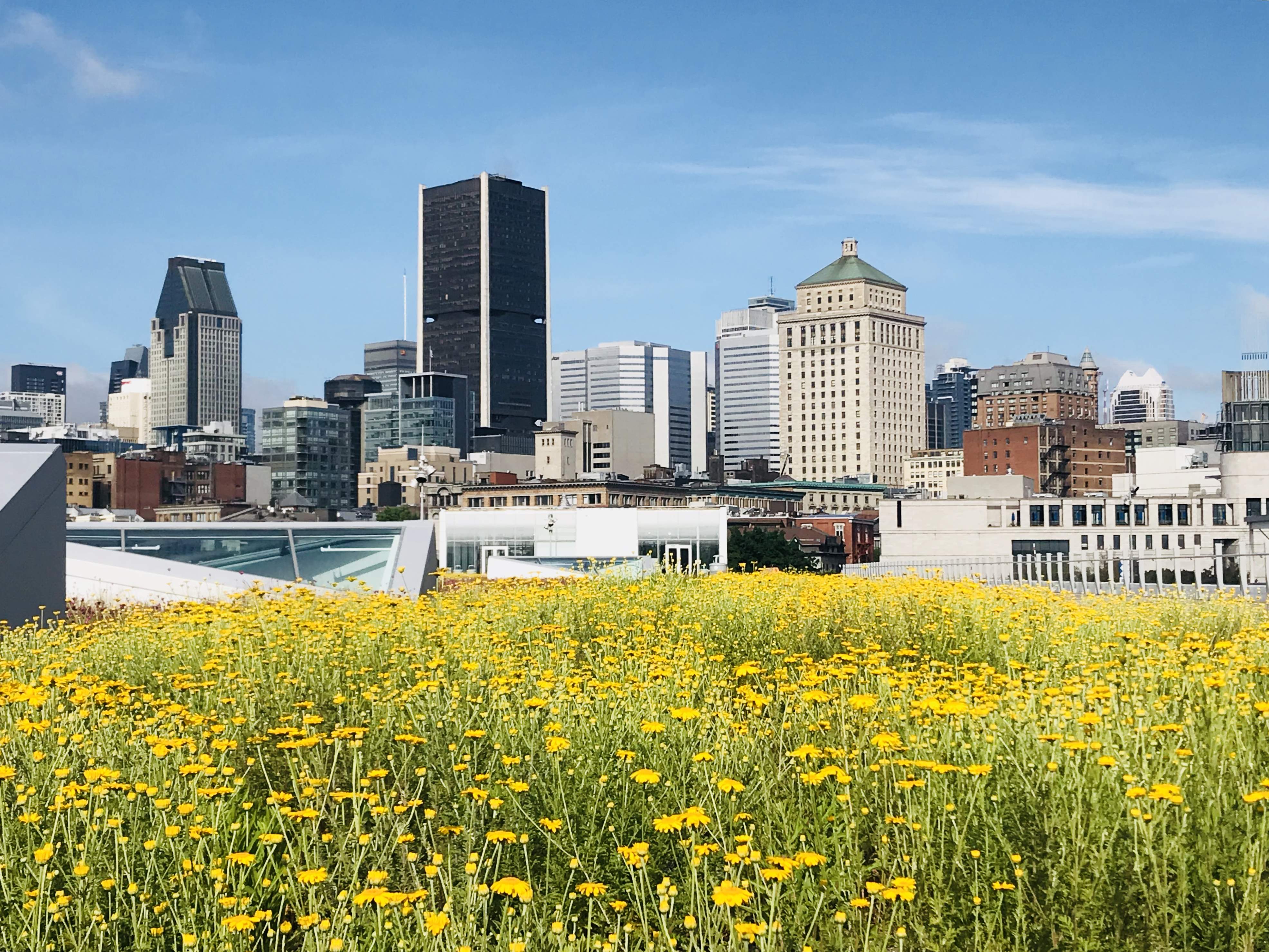 Formerly owned by the Port of Montreal, Promenade-Bellerive Park was ceded to the city in 1964. Today, it is a vast 2.2-kilometre green space bordering the St. Lawrence River, featuring a bicycle path, a trail and views of the river and the Boucherville Islands.

Every year since 2011, MPA employees have taken part in the park’s shoreline cleanup, organized by Fednav as part of the Great Canadian Shoreline Cleanup. 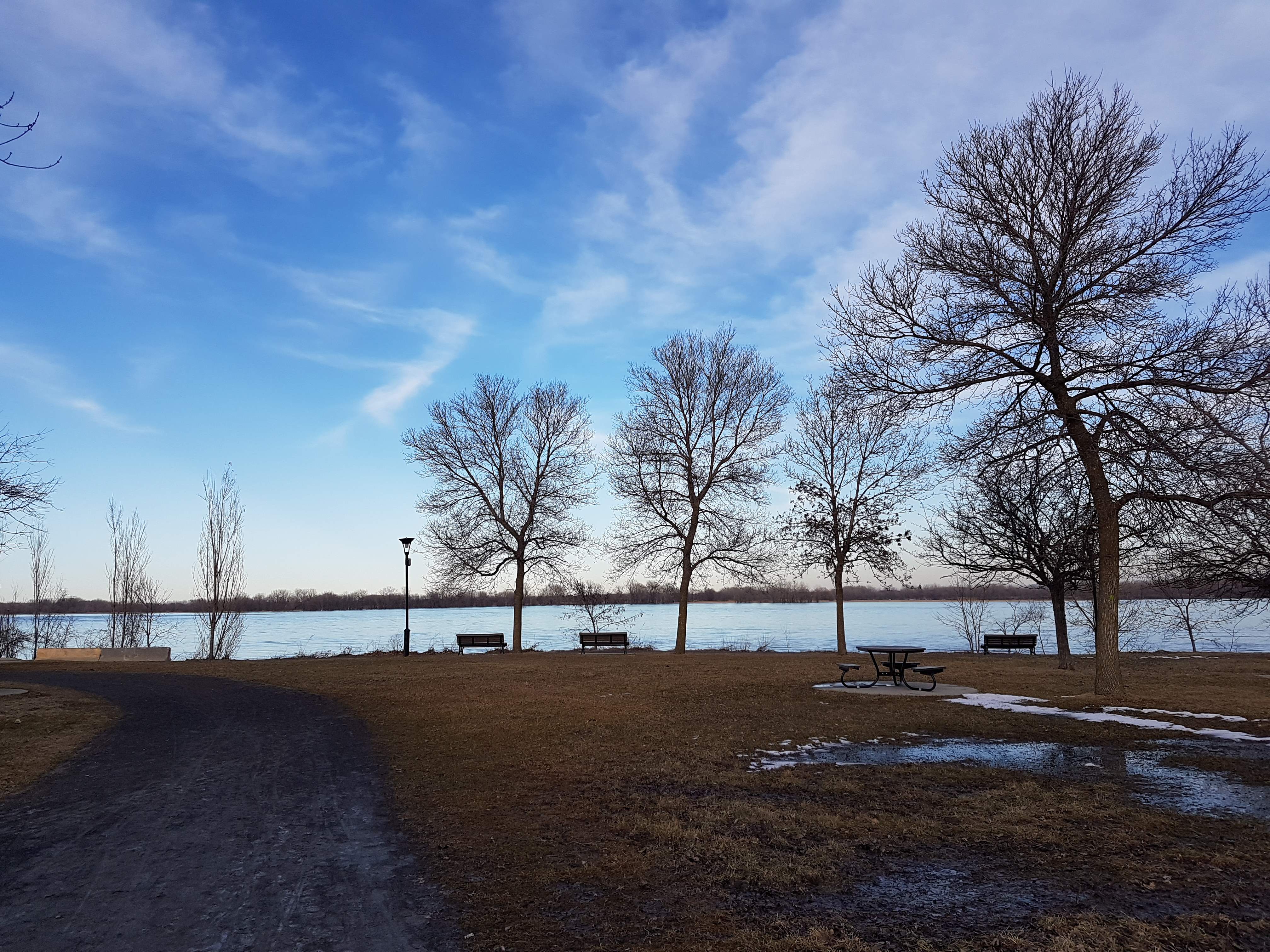 Few people know that the MPA administers Île Verte and eight islands in the Boucherville Islands. Five of these islands - Dufault, Lafontaine, Montbrun, Tourte Blanche and the Tailhandier tidal flats - have been the subject of an intensive fish habitat rehabilitation program. In all, more than 28 hectares of quality fish habitat have been developed to facilitate their spawning, movement and living conditions. In April 2019, the MPA committed to working with Environment and Climate Change Canada to designate these islands as a National Wildlife Area. 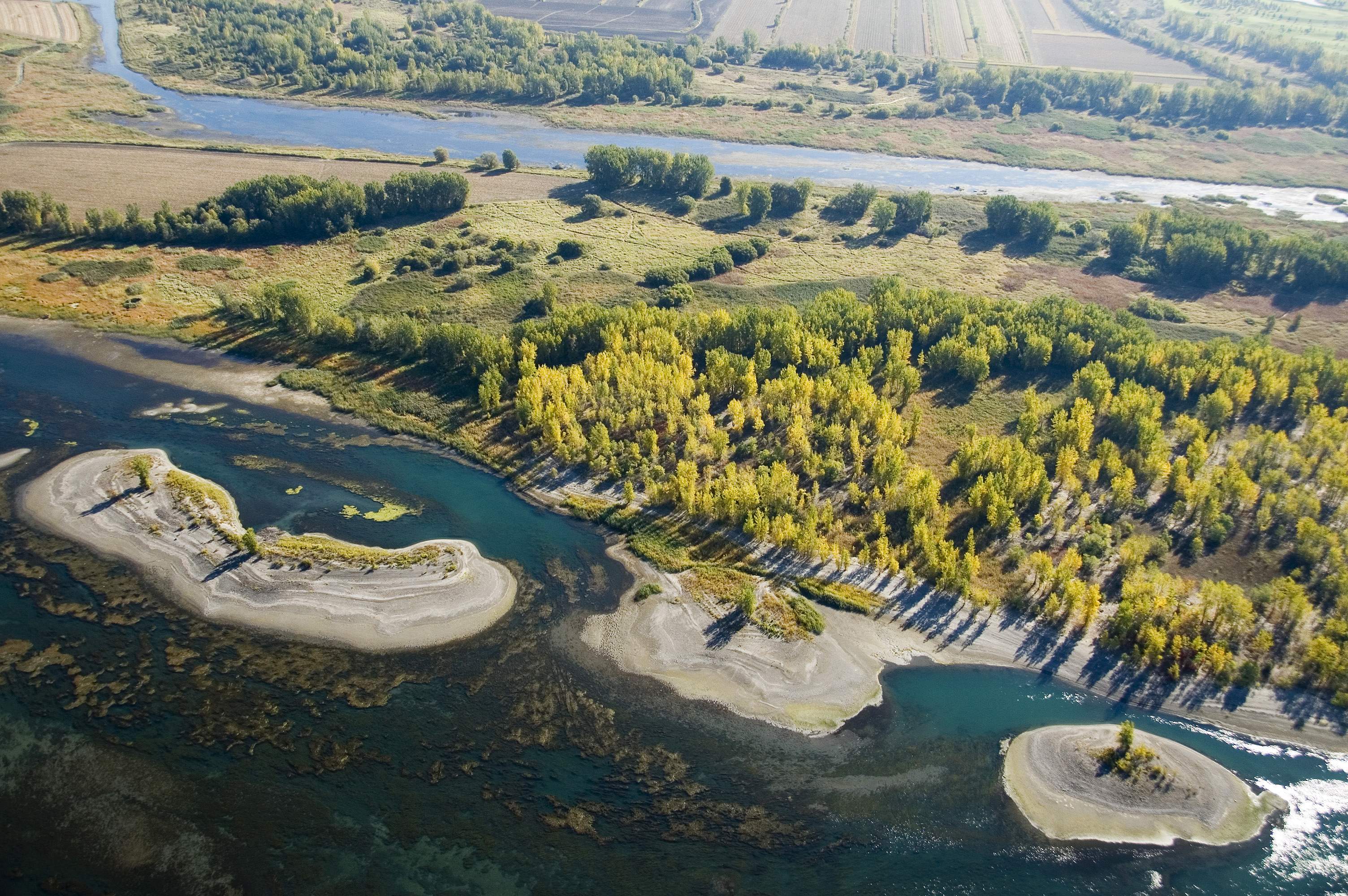 Several special-status species are found on Port of Montreal territory. Here are our actions to protect them.

The Copper Redhorse is the only species of fish that is unique to Quebec. It lives in the shallow grass beds around the archipelagos of the St. Lawrence River and in freshwater lakes such as Lake Saint-Pierre and Lake Saint-Louis. To offset the impact of the container terminal project in Contrecœur on its habitat, the MPA is considering, in particular, the implementation of a project to improve water quality in the Richelieu River watershed, the establishment of grass beds in the Contrecœur sector, participation in a research program on assisted reproduction and participation in an educational program on the Copper Redhorse for river users. 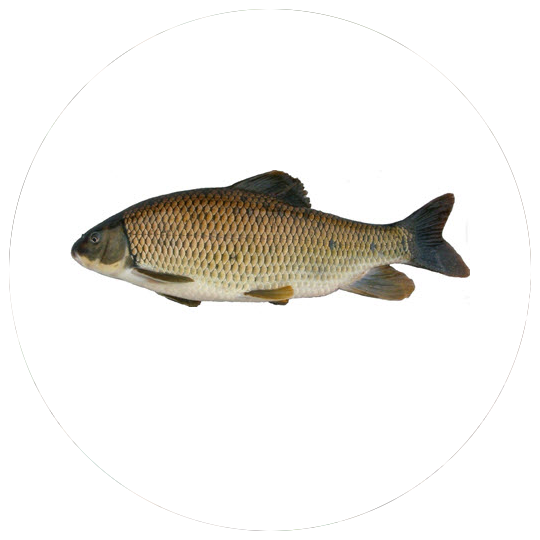 The Bank Swallow is the smallest swallow in North America. Its nesting sites are protected. The MPA is involved in several projects to protect its habitat. In 2019 and 2020, together with the Grand Council of the Waban-Aki Nation, it built six artificial nesting boxes in concrete and sand in Contrecœur. These nesting boxes could lead to making 1,200 burrows available for nesting. The biologists on the project were very impressed by how quickly the swallows took possession of the ‘condos’ offered to them.

A nesting box for Bank Swallows was also installed at Section 110 in Montreal's east end in collaboration with the NPO priority intervention zone, known by its French acronym ZIP (for Zone d’Intervention Priorité), the Jacques-Cartier ZIP Committee under the St. Lawrence Action Fund (SLAF), to which the MPA makes a financial contribution. Also through the SLASF and with the participation of the Jacques-Cartier ZIP Committee, four nesting boxes for Purple Martins were installed in 2020 on the Great Tailhandier Flats that are part of the Boucherville Islands Archipelago. 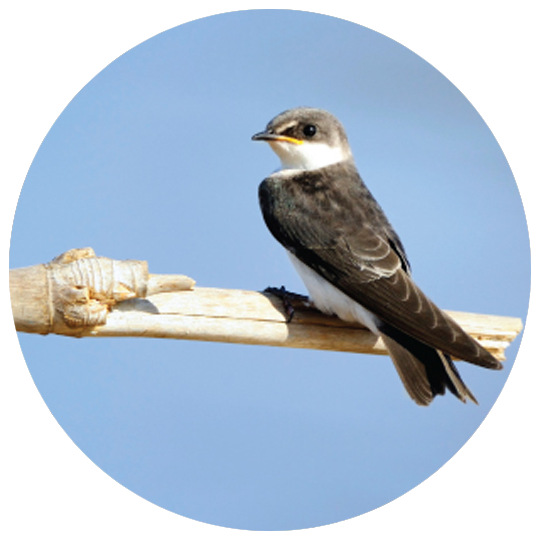 The Western Chorus Frog is one of the smallest anuran species in Quebec. The species is rare and numbers are currently low. Studies conducted by government agencies since the 1990s have confirmed that it has lost nearly 90% of its historical range in the Montérégie region, where it was present in abundance in the 1950s. In developing its container terminal project in Contrecœur, the MPA took into account the Western Chorus Frog so as to ensure that activities would not encroach on its habitat. Though the developments will be located well away from its habitat, the MPA has planned to put in place several mitigation measures for preventive purposes. 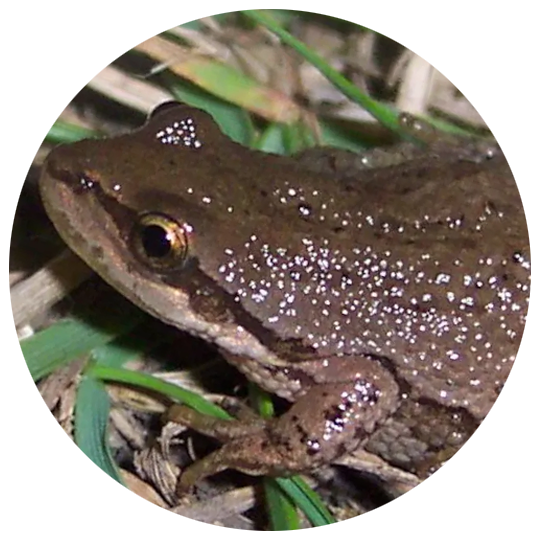 A bird of prey known for its fast flight, the peregrine falcon seeks high sites for nesting. Several nesting sites have been observed on structures in the Port of Montreal. To help protect the species, the MPA regularly monitors nesting and adapts its work schedules to minimize impacts. 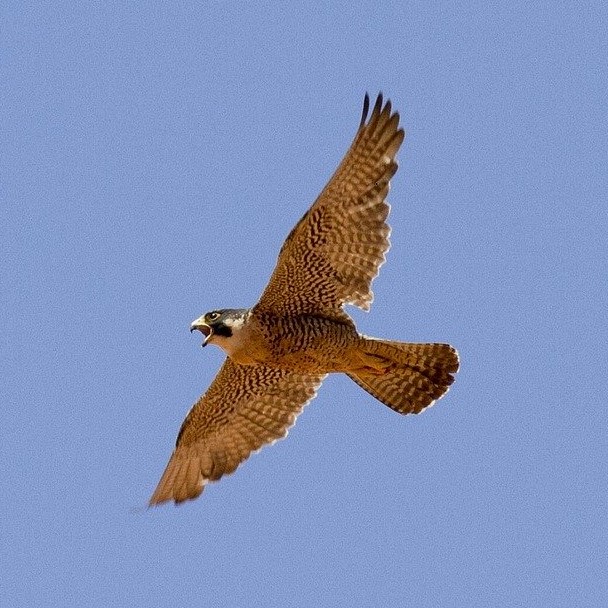 The Least Bittern, the smallest heron in the Western Hemisphere, has a natural habitat in densely vegetated marshes. Nesting sites can be found on the Boucherville Islands, which are administered by the MPA. It is noteworthy that in April 2019, the MPA committed to work with Environment and Climate Change Canada to have these islands designated a National Wildlife Area. 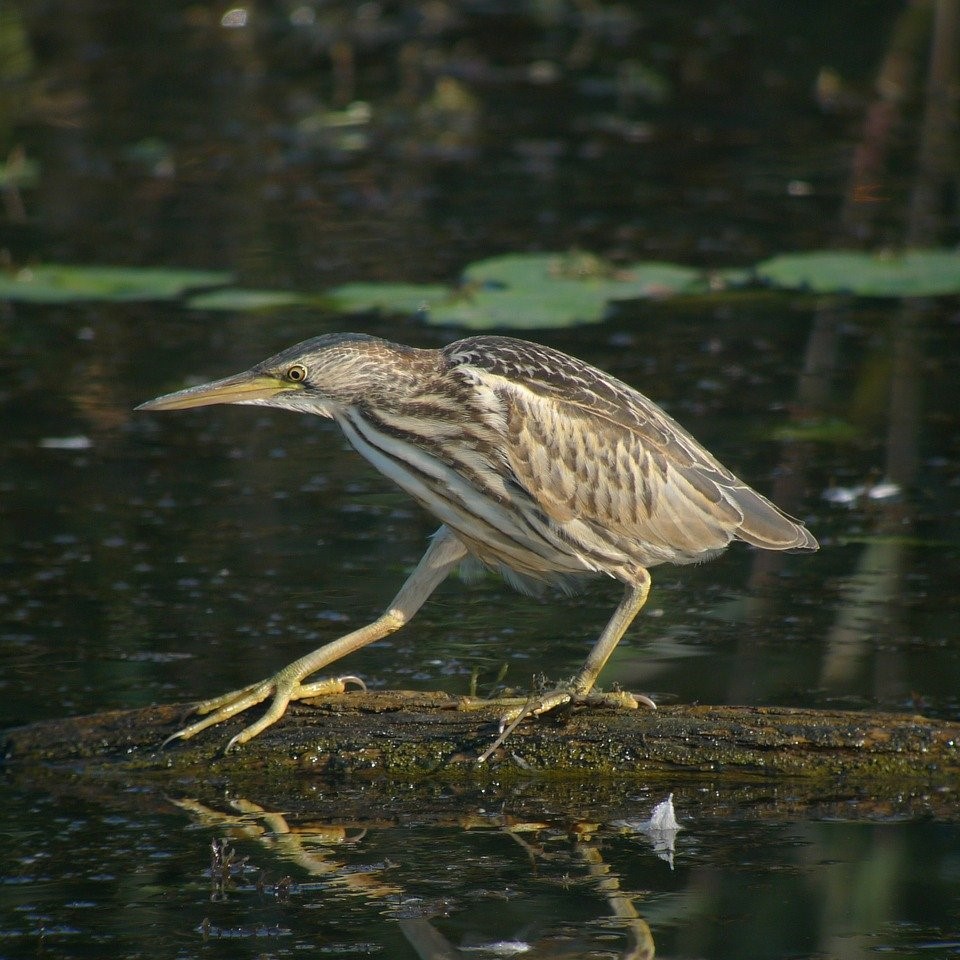 To reduce the discharge of suspended solids and hydrocarbons into the river, 28 hydrodynamic separators acting as storm water treatment systems have been installed to date on MPA territory.

This registered charity is dedicated to providing financial support for projects that promote the conservation of the ecosystems and biodiversity of the St. Lawrence River and its Gulf. The MPA selected four projects, to: preserve Purple Martin colonies; produce a wetland restoration and conservation plan; control common water reeds at the Lavaltrie marsh; develop the Important Bird Area (IBA) in the Îles de Contrecoeur National Wildlife Area.

Reduce the sources of pollution

The MPA’s locomotives have been replaced by Genset multi-generator locomotives that reduce GHG emissions by close to 30%.

The MPA developed a web and mobile application to optimize truck routes to and from Port of Montreal terminals and ultimately reduce the Port's environmental footprint. This tool displays real-time truck processing times on Port territory so that drivers and dispatchers can make informed choices about their route through the Port, better plan their route to the terminals, avoid traffic congestion and save time, all while reducing trucking-related greenhouse gases (GHGs). Since 2019, this tool has been enhanced and now uses artificial intelligence to provide predictive 24-hour truck wait times. An initial assessment of this initiative’s beneficial impacts is a six-minute reduction in the total processing time for trucks (from the time they entered the Port to the time they left), a drop of more than 200 tonnes of GHGs annually compared to 2018, despite an 8% growth in the number of trucks coming to the Port compared to 2018.

To reduce noise pollution caused by container handling activities, white noise alarms have replaced audible backup alarms for equipment on the terminals. The MPA has done the same with is service vehicles. Unlike traditional audible alarms, which emit a higher pitched noise level, white noise backup alarms use a broad frequency range. White noise backup alarms emit a softer sound to the ear that dissipates quickly. The sound is audible only in the safety zone, resulting in less noise while ensuring worker safety.

involvement in various committees and support of several environmental organizations

In 2007, the MPA joined members of the maritime community to found Green Marine, an industry initiative of the St. Lawrence and the Great Lakes that aims to guide the maritime industry towards environmental excellence. Its mission is to make maritime transport greener and more sustainable.

The Port of Montreal is involved in various committees and support of several environmental organizations, such as: 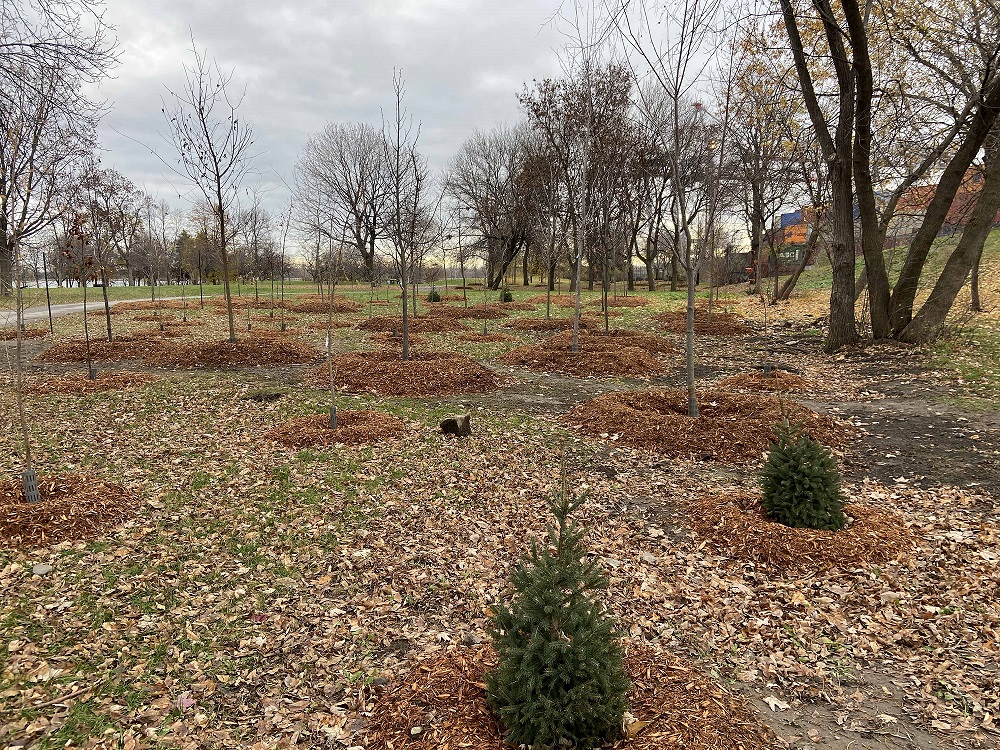 The Port of Montreal is continuing its tree planting campaign with its aim to plant 2,000 trees...
Read More
News 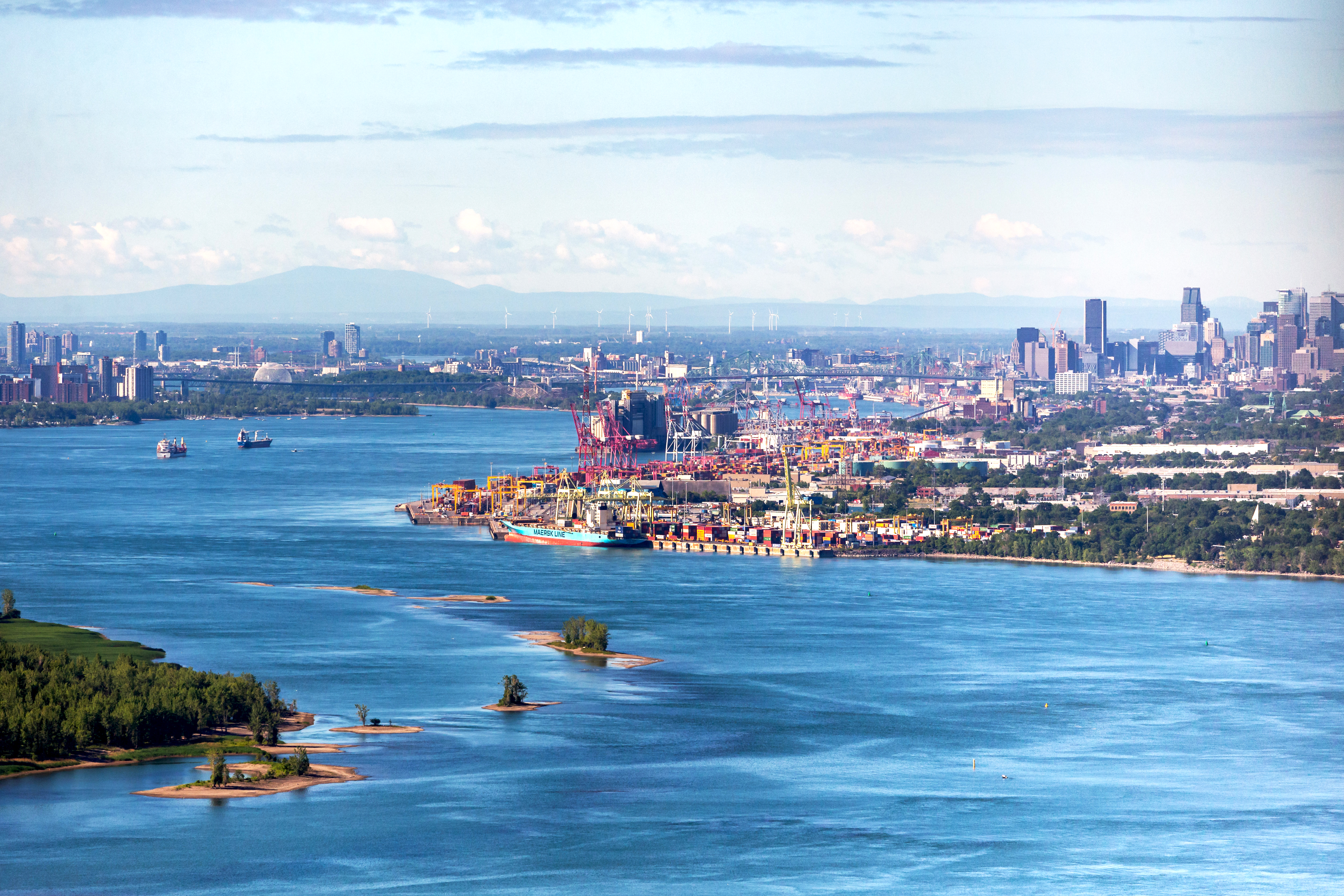 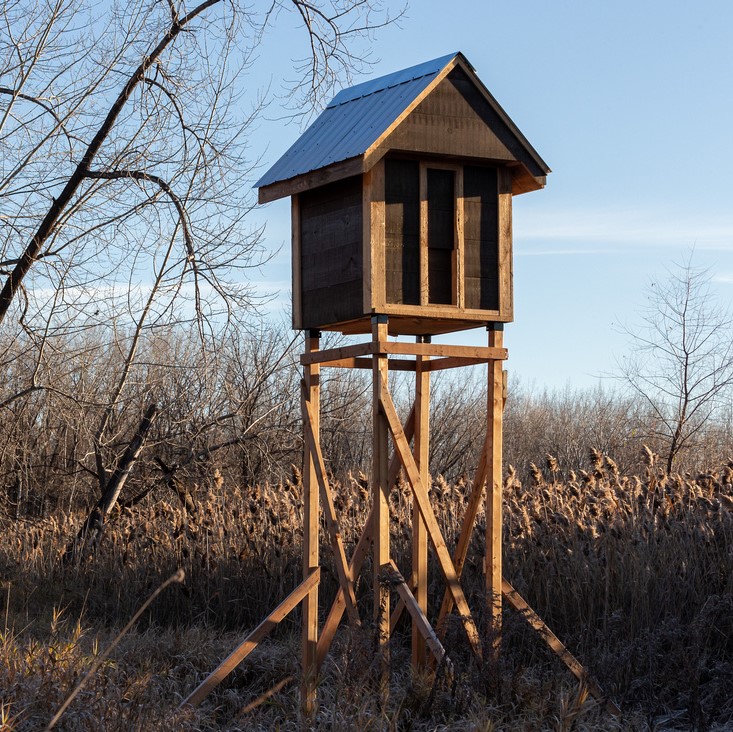 Successful installation of bat condos on the Contrecœur site